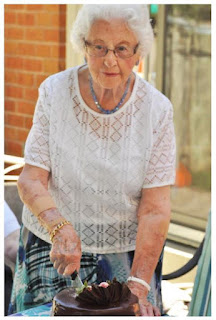 My post today is about a living Blaney descendent.

Elizabeth Blaney’s last living child is her daughter Joan who was born July 24, 1917. Joan celebrated her 95th birthday this past week with two happy events.

On Monday, there was a coffee and cake event for friends and neighbours in the recreation room of the small apartment building where she lives.

Joan was one of the first residents to move into the brand new low-rise “Senior’s” building in 1990. Unfortunately her move was barely complete when she needed to make an emergency trip to Vancouver where she and her daughter had the difficult task of moving her mother Elizabeth into a nursing home. Unfortunately Elizabeth died almost immediately thereafter. Due to her own health issues, the very recent trip and the move, Joan was unable to return to Vancouver for the funeral. This upset her very much and has continued to be a great regret.

Since all residents must be 65 or older when they move in, there are only about twelve of the original residents still living there. They were all present at the party and since there were many others who had come to know Joan throughout the past twenty two years there was a turnout of about forty people to wish her well. She received many cards as well as some chocolates, gift cards and flowers.

Joan’s three daughters, one of her grandchildren and both of her great-grandchildren, Matthew and Adelaide were able to be there. Since the party was held on a Monday afternoon, not all family members were able to attend. On behalf of Mom and the rest of our family it was an opportunity for me to express to everyone, our appreciation for all the friendship and neighbourliness she has received over the years.

I expressed thanks to my sisters for all their efforts as we worked together to make this a memorable event for our mother and her friends. Thanks also to my daughter and son-in for taking time out from their workday to bring the children. Joan was surprised and delighted to see them there as were many of the guests. Adelaide celebrated her birthday this week also, being three years old on the 25th of July.

The candles on a big cake were lit and Happy Birthday was sung. Joan made her wish as she made the first cut into the cake. She thanked everyone for coming and for the cards and gifts they had sent or given to her.

Guests enjoyed a selection of desserts along with their piece of birthday cake; there was also tea, coffee and lemonade. Old classic tunes played in the background and we presented a brief slide show that showed some of the highlights of Joan’s life. The guests seemed to enjoy the show and learning a little more about Joan.  A couple of women there had also come from Joan’s home town of Birmingham and one had lived near Joan in Toronto many years ago but had not know her then.

Just as the party was ending, we were surprised by a friend of Mother’s presenting her with a Queen’s Jubilee lapel pin. It had been sent by the local Conservative MPP who was unable to attend that day.
Mother had a wonderful afternoon. She was surprised and very pleased to see so many people attending. She also loved the opportunity to visit with her guests and receive their good wishes. She is proud of her pin and will treasure it.

We were able to get some good party photos that I will print and post on the bulletin board in the building lobby to share with the residents.

On the Sunday after Joan’s birthday all the family were present to celebrate with a luncheon which was followed by birthday cake in her granddaughter’s backyard.  Lunch was in a nice restaurant where we were able to sit together in the window and enjoy a leisurely meal in a lovely spot. The decor, food, wine and service were all good.

Back at the house we gathered outside for a decadent chocolate mousse birthday cake, sangria and tea. The yard was decorated with blue streamers and blue and white balloons. It was a beautiful summer day and we were able to take some family portraits that will be enjoyed by all for years to come.

We are truly blessed to have her still present in our lives and happy that her great-grandchildren have the opportunity to know and love her too.