HARRY AND BESS FACE THE SEA


Elizabeth (Beth) Blaney Welch, my Grandmother, liked to be in control, truly believing that she knew what was best for everyone. On the other hand, my Grandfather, Harry Lewis Welch was mostly easy going but occasionally he would aggressively take action.

So in an interview sixty-five years later it is not that surprising to hear Bess, still sounding angry, saying “I didn’t decide it! Harry decided that. He just made up his mind and that was it. He had sold everything - sold everything. I was mad! He had gone and bought the tickets. What could I do?” She pauses and the shaky tinkle of her tea cup being placed on the saucer can be heard.

As previously written Bess told her niece Patricia* that she had been ill from work and her brother Bill had provided the funds for her and the children to have a two week rest in Hertfordshire in south east England. Early in the second week, Harry called to tell her to hurry home as they were leaving almost immediately for Canada. No permission, passport or application form was necessary in order to emigrate at that time.

She may have been in the town of Hertford or St. Alban where there was a Blaney family but I have not done enough research to determine if they were related. Both are about 100 miles from Birmingham and it took most of a day on the bus or train to get home. While she said Harry did not know anything about Canada, she knew a little from her Aunt Nellie Cheffins in Montreal. Several relatives had gone before them but perhaps they didn't write home.

Bess said that on her return home she found, “There was a woman there and she said `I bought everything`. Oh! I screamed. I have to take something! I went into the kitchen and took two spoons & knives. There’s the knife right there".

However there are a few family heirlooms that we believe were brought from England so I expect they came with at least a trunk and some suitcases but not much money. According to passenger list records Harry was carrying £20 and Bess was carrying $100. (each of which would be comparable to about $1,000. in today’s Canadian currency). I can only imagine moving to a foreign country today with $2,000. to begin a new life and provide for a family of four.

On the above records Harry indicated he was going to work as a harvester (farm labourer) in western Canada. Usually people from the UK went to Canada or the United States to escape poverty or unemployment at home. As the Canadian economy had picked up in the previous few years, Canada was actively promoting a new and better life with the opportunity for farm work and or Canadian land ownership for those who emigrated. Given Harry’s health problems, I expect he was one of the many who said they came for that reason but actually hoped to find other work in the cities. He and Bess would continue to work hard throughout their lives.

Their voyage began with about a 90 mile trip north-west on the LMS Railway from New Street Station in Birmingham to Lime Street Station, Liverpool, on the west coast of England, in order to board the Canadian Pacific Liner, the S.S. Montcalm. That ship would take them to Montreal Canada.

With trains traveling at about 30mph, if they were travelling on a direct train it would have taken about 3-4 hours but if it was a route with stops in many small towns along the way it would have taken an extra hour or so. It would take even longer travelling overnight which they might have done to avoid paying to stay somewhere in Liverpool before boarding the ship the next day. Weekday morning trains left as early as 4am – getting to Liverpool at about 10:45am. The 3rd class fare was about 12 shillings. (20 shillings in a pound).

The S.S. Montcalm was built in 1921 by John Brown & Co. in Glasgow Scotland and was owned by the Canadian Pacific Line. It was 16,418 tons, 549 feet long x 70 feet wide with 2 funnels and two masts. She had a service speed of 16 knots which enabled her to cross the Atlantic in less than a week.

There was accommodation for 542 cabins and 1,268 third class passengers. The Montcalm’s maiden trip was in January of 1922, travelling between Liverpool and St. John New Brunswick, Canada. In the winter, her destination was St. John, New Brunswick in the spring, summer and fall she continued down the St. Lawrence River to Montreal, Quebec.

Bess was 26 and Harry was 30 when along with Lewis age 7 and Joan age 6, they boarded the Montcalm on Friday August 10th, 1923. For the children it was a great adventure including new playmates but for their parents there must have been some trepidation around leaving behind the home and life they knew. They were facing the sea for the first time and a new life as strangers in a land almost three thousand miles away from family and friends.

As to the voyage, it was a seven day journey over the same route taken by the "unsinkable" Titanic which sideswiped an iceberg and sank in the spring of 1912. They also knew about one of the worst ship disasters in Canadian history; the sinking of the Empress of Ireland, carrying 1477 passengers and crew, en-route from Montreal to Liverpool, when it collided with a freighter in the fog and sank in the St. Lawrence River in 1914. 1,012 of its passengers and crew were lost.

After boarding they looked around the 3rd class deck which was the lowest deck of the ship, for their 4-berth room. They walked along the narrow passageways which were lined with handrails to help with the rocking of the ship and in case of rough seas.

The children were delighted with the bunk beds but the room was pretty small as shown here. There were four bunk beds with curtains and rails as well as a small sink with a mirror above. They probably went back onto the deck to wave goodbye, along with the other passengers, to those on the dock wishing everyone well on their long trip.
According to the Canadian Pacific archives, life aboard ship was pretty comfortable compared to previous years. As Bess herself would much later say “it had a beautiful playroom for the children, we had meals in the restaurant area - it was beautiful” Photos of third class areas show a large dining saloon and a smoking room.

Joan remembers her and Lewis having the upper bunks and her parents sleeping on the bottom ones in the little room they shared. She remembers the playroom, walking with her father on the deck and her mother being sick for much of the trip.

Family lore has it that Bess was pregnant when she left England and likely had a miscarriage. The story goes that her second daughter Eileen Ellen Florence was conceived in England and born in Canada; however Eileen’s birth certificate shows that she was born in Montreal May 9th, 1925 almost two years after their arrival.


During the trip Bess and Harry made friends with Harry Robert Ralph and his wife Beatrice. Harry Ralph had emigrated to Montreal in 1914, returning to England and marrying in 1918. The Ralph's were on their way from London back to Montreal travelling 3rd class on the Montcalm as well.

Shipboard routine was breakfast 8:30am to 10:00am. and lunch was served at 1:30pm. Tea was at 4:00pm on deck and in all the public rooms, with the children served separately. Dinner was at 7:00pm. Dinner included soup, salad and a choice of salmon, beef or lamb along with vegetables, desert and coffee or tea. An orchestra played at lunch and dinner as well as on deck for dancing. Divine (church) service was 10:30am. on Sunday.

There was a bookstall stocked with postage stamps, books, magazines, candy, toys and novelties. There was also a money exchange and free rental of a safe for storage in the Purser's office of any valuables. Deck chairs and steamer rugs were available for rent.  There was a physician and nurses on board for attending passengers and in the case of sickness contacted on board there was no charge for his service or medicines.


Bess described the part of the journey when they reached the area where the Titanic sank, saying “we went right through the icebergs. I was scared sick! Everyone on board was locked inside, no one was allowed outdoors on the decks”. 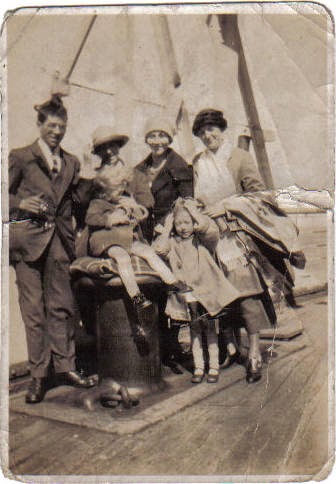 The last leg of their journey was 139 miles down the St. Lawrence River. They arrived at the port of Montreal on August 17th, 1923.  It was a breezy, warm and sunny summer day when they disembarked with a temperature of 72 degrees. Their luggage was examined by the authorities then left on the dock requiring their personal attention but it could also be held for claiming later.


Harry on the left and Bess on the right, their friends in between and Joan standing holding her hair.


They had an address for Aunt Nellie Cheffins' home and they proceeded from the dock to Rue Theodore which was several blocks away. They were able to stay there for a few weeks until they were able to find a tiny place of their own in Montreal and begin to work.

In her 90s Bess would say in an interview with her niece Patricia Blaney, "Montreal, that was a tragedy and Bess wrote to her family in Birmingham about the same time "2 days after we landed I would have come back to England right then – but no money left to do so. I never wrote home to tell them either”.

In spite of many difficult challenges in Montreal, Harry & Bess made the best of it there for about four years.

* Thanks to Patricia Blaney Koretchuk for her generous sharing of her recorded interview with Bess conducted in 1988.