I have three photos that I have been unable to identify for many years. They were found among my Grandmother Bess’s photo collection which I received after she died in 1990.

Since almost all the ancestor photos were of her Blaney family, I tried asking every Blaney relative I came across over the years if they recognized him to no avail.  I also sent one to a member of the Langley family who didn’t recognize it either. 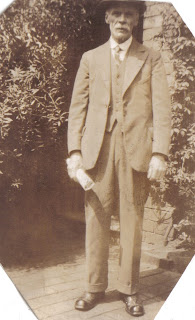 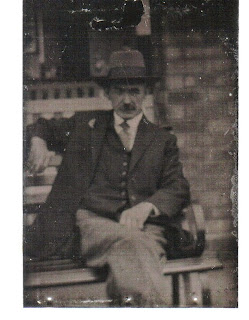 I recently sent them to a professional photo detective who thought both photos of the standing man were the same person. She also believes he is the seated man with this photo taken years earlier as there is no grey in the mustache.

She dated their clothing about mid 1920s and thought that while he was well dressed, the clothes were very conservative.The poses, ties, hats and collars are similar. Their angular faces, the shape of their noses and mustaches are seen in all the photos.

The picture of the seated man is a tintype which were widely used in the 1870s but were still in use in the early 1900s by itinerant photographers.

During our conversation, we ruled out that these photos were of Edwin Blaney (Bess’s grandfather) due to them being twentieth century photos and he died prior to 1891. These would not have been the clothes of his time and the photos are not similar to those of his son, Harry Blaney. I will still have to search for photos of Great-Grandfather Edwin Blaney.

While I have been focusing on the Blaneys for some time due to writing the blog of my Grandmother’s story, I was also occasionally working on my Grandfather Harry Lewis Welch’s ancestors. The only photos I have of his parents are ones of his mother Mary Ann (Lewis) Welch and only a couple of those. As mentioned in past posts he did not keep in touch with his parents for years after leaving England.

While researching his only sibling, his sister Amy (Welch) Bullivant, I came across her will. In it I found the name of their cousin Olwen Hansen. I had heard the name Olwen many years ago in reference to a cousin of Amy’s. However I didn’t know if it was a surname or given name or even if it was a male or female cousin.

When I began to follow up on Olwen Hansen I happened across a family tree which mentioned the name and showed a connection to Harry Welch & Mary Ann Lewis – my Welch great-grandparents.
I sent a request to the owner of the family tree and was delighted when she replied from England that she was indeed the daughter of Olwen (Cousins) Hansen!

She immediately offered to send some photos and we exchanged a few of Amy (Welch) Bullivant as she knew her quite well and I had a couple of photos of Amy and her husband Bill Bullivant from their visits to Canada.

While I was looking through my photos I came across the ones of the unidentified man and sent them along in case she might recognize them.

Happily she responded with a photo of Amy and Bill’s wedding day, which I had not seen before. In the back row were Amy’s mother Mary Ann (Lewis) Welch  which I immediately recognized and behind Amy was her father Harry Welch. We both agreed that the man in the back row was the same man as I had in two of my unidentified man photos. Olwen is the bridesmaid and Olwen’s mother Gwladys (Lewis) Cousins, sister of Mary Ann, is in the centre of the back row. 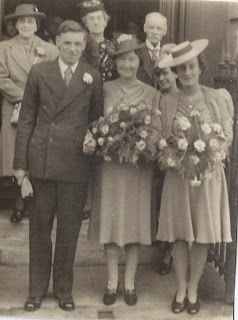 Harry Welch would have been about seventy-two when his daughter Amy married in the summer of 1942 in Birmingham and he died at about age seventy-five. His health seems to have deteriorated between the two standing photos as suggested by the walking stick. He looks quite thin in the wedding photo. I now think the standing photos were likely taken in the 1930s given the information available. Also Harry Welch was a brass worker and likely while well dressed, was not as up-to-date as some more prosperous or less conservative men might have been.

I realized that I had not considered him a Welch ancestor knowing the history of the lack of contact with Harry’s parents and the overwhelming number of Blaney photos present in the collection. 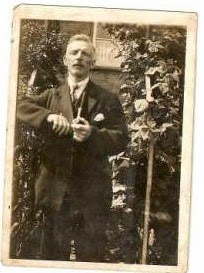 In summary, my grandfather Harry Lewis Welch’s father was Harry Welch, born in Birmingham in 1871, married Mary Ann Lewis in 1892 and died in Birmingham in 1946. I am so delighted to identify the unidentified man and have a photo of my Great Grandfather Welch to put together with his genealogy data.

Several years ago I was in touch with a Blaney cousin in British Columbia who has a photo very much like mine and after hearing this story about mine being my Great Grandfather Harry Welch, he felt that his photo is likely the same man.

Recently while showing my mother Joan Welch some scanned photos to help pass the time when visiting her at the nursing home, she suddenly pointed to the photo above and said "that's my grandfather!" Whenever I asked her in the past seven or eight years to help me identify the photo, she couldn't.

What a wonderful connection I have with my newly found cousin who has a generous sharing nature. She has a family tree and diary done by her Lewis Uncle and lots of photos and I have my Grandmother’s diaries and photos.

We continue to correspond and perhaps we will meet one day. Who knows what else we may discover about our shared ancestors.