I have added a new page to the blog site displaying some scanned copies of writings found in my grandmother Bess's journals. You can find a tab along the top of the site, labelled Bess's Writings.

As previously written Bess was pretty much self taught with respect to manners, music, art and language and she loved poetry.

She wrote some and read a great deal of it. Her first book of poetry was by English poet Percy Shelley (1792-1822) which she received 1914. Shelley, according to one biography I read,

“Shelly has come to symbolize the free and soaring spirit of humankind. He is associated with the idea that one should not content oneself with the mundane but aspire to ever-loftier ideals of perfecting the self, and above all, with the idea of hope.”

Bess copied many poems into her notebooks and journals and memorized hundreds of poems beginning in childhood and continuing over the years. It seemed to me that she had “total recall” until very late in life when her age, strokes and her solitary lifestyle began to erode her short term memory. Many stories, poems and songs were still there in her long term memory though.

The poems are usually about inspirational topics; striving to be a better person, overcoming adversity, religious themes and many of them are sad.

When my mother Joan read one a few years ago she could still recall her mother reciting it when she was a little girl.


When Harry made recordings to send overseas or she wrote letters to family, Bess often included a poem or song lyrics about her feelings for them. She corresponded regularly with my family from the time we left Vancouver in 1952. Later, she also wrote to my children, her great-great grandchildren.

I want to share with family, some of her poetry and writings. I have read all her journals and these are ones I think were her words, based on the subject matter or her signature attached. Her handwriting is quite legible but I would be happy to translate if necessary.

This selection includes memorials to her father, her husband, her brother Ted and notes to family members. I will continue to add to the page as I am able to find and scan others. 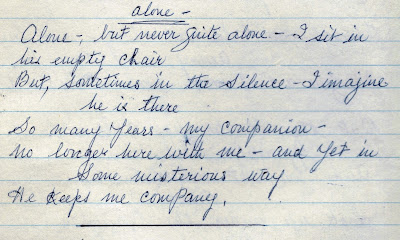 Perhaps some family members will find them of interest.