GROWING UP IN TORONTO

Back in Toronto, Harry & Bess continued to work regularly for most of the 1930s and their children grew into adults. The Toronto City Directories show that they had six addresses during that time, perhaps due to the need for space, the ups and owns of employment and finances or proximity to work or school.

Life was interesting in Toronto and there was plenty to do. There was dancing to the Big Bands at the Palais Royale Dance Hall, the Canadian National Exhibition ran for two weeks at the end every summer and horse-racing was available at Woodbine track. Maple Leaf Gardens opened in 1932 and became the home of the Toronto Maple Leaf Hockey Team and in 1938 Superman was created by Toronto high school student John Shuster.

For sports fans there were professional hockey and football teams. There were also the Athletic Grounds provided by the city that included bowling greens, football and baseball fields along with skating rinks, hockey rinks and toboggan hills.


In his teens, Lewis’s artistic talent was recognized and the family scrimped so he could attend the Ontario Art College. Joan felt that his need for art supplies became more important than other things the family might want to buy but she was forever proud of him and his talent.

During 1936 and 1937 some of his work was published in The Tangent, an annual OAC student publication of stories, poetry and art and in the 1937 edition he is shown as the production assistant.


By 1938 Lewis was contributing to the family home, an apartment over a drugstore, on Queen St. E at Jarvis St. He was working as an artist for Stanley Manufacturing, a metal printer and fabricator established in 1917. He would go on to be a very successful commercial artist.

I am proud to own a watercolour landscape painting he gave me as a wedding present in 1961. 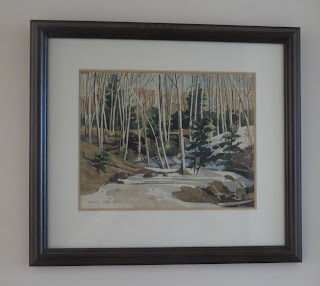 Church and music were important to the family. There were Church services twice on Sundays with choir practice, bible study and youth group events during the week. At St. Stephen's United Church on Queen Street, Bess was a soloist while Joan and Lewis sang in the choir and they all participated in church social activities. 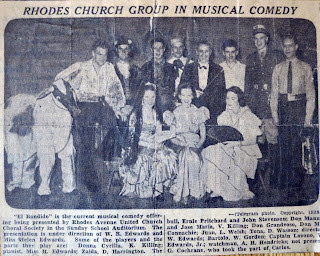 Lewis is seen here in a Rhodes Avenue United Church Choral Society production in 1938. He played the role of Tona in the musical comedy El Bandito.


There was certainly no laundry or other housework done on Sunday. Shops were closed and in Toronto the Good, there was no fun to be had except good clean fun at the beach with free streetcar rides for children from poor neighbourhoods.

The Eaton's Department Store covered their windows, park swings were chained up and there was no toboggan riding on Sunday. Every activity was subject to the 1906 Lord’s Day Act and Sunday as a day of worship or rest was enforced. A Toronto referendum in 1950 allowed professional team sports to be played on Sunday. Theatre performances, movie screenings, and horse racing were not permitted until the 1960s.

In the summer of 1932, at age 15, Joan left school to work. She got her first job because her mother knew the owners of Chapman Brothers Jewellery store at 261 Yonge Street near their home.

The Chapman family had a cottage at Lake Simcoe and they hired Joan to be a mother’s helper for the summer. It was about two hours north of Toronto in those days before today’s major highways. She lived there all summer doing any chores that needed to be done from cooking breakfast for the family and their many guests to picking up the mail.

One day she was travelling alone by canoe to pick up the mail at a small store down the lake. While in the store she became anxious because the sky was becoming dark and the winds were picking up. Lake Simcoe is still known for quickly arriving storms during which strong winds create very high waves.

On the trip back to the cottage Joan could not manage the canoe. She was being tossed about by the waves and she was frightened, thinking she was going to capsize and be lost to the angry lake. Luckily the skipper of a motor boat heard her cries and took her aboard his craft, taking her back to the cottage while towing her canoe along behind. It was an experience she never forgot.

She told the story in her late eighties after being caught out in a storm on a fishing boat with her son-in-law. The motor stalled in the pouring rain and they had to be towed to shore by a neighbour.

At the end of that summer job Joan began working at light manufacturing jobs. She worked on the assembly line of the Willard Chocolate Factory and for a company making advertising buttons. She often told of the noise of the button stamping machines and how people working every day in a candy factory soon lose their appetite for candy.

While Joan was working and living at home she lamented the fact that her younger sister Eileen who was a social butterfly who loved going out dancing, often sneaking out in Joan’s clothes; putting them back soiled.

Joan also told a story of Eileen hiding dirty dishes in the oven to avoid taking her turn washing them. Eileen was eight years younger and I am sure she had a few stories of her own to tell about her older siblings.

Their father Harry also loved to dance and he won a few prizes for ballroom dancing in Toronto including a set of silver apostle spoons. Bess was a singer not a dancer but Harry had no difficulty finding partners in their social circle. 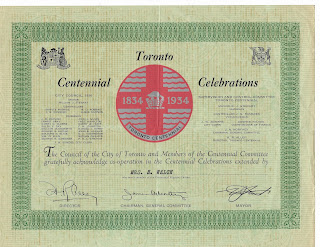 In 1934 Toronto celebrated its 100th birthday with centennial activities and parades. On the eve of the centennial, services were held on the grounds of the CNE with 11,000 people attending. Bess was part of a 2500 person choir from various churches and they were all given a certificate to mark the occasion. That very large crowd singing God Save the King along with the 2500 voice choir must have been quite the sight and sound.


It was about 1934 when Joan met the man she would marry.