While Elizabeth (Bess) was not the first member of the Blaney family to leave Birmingham for Canada, she is the central figure of my family history.

Her parents were Harry Blaney (1876-1955) and Martha Jane Elcocks (1877-1961). They were married July 9, 1895 in Birmingham, England. According to their Entry of Marriage document, Harry was a house painter at the time. His father is shown as Edwin Blaney, a saddler (deceased) and Jane’s father was William Elcocks, a brewer.

Elizabeth was born on Upper Ryland Road, February 23, 1897. This was a poor and tough working class area of Birmingham. Her grandmother and an aunt lived at the top of the hill.

Birmingham was the 2nd largest city in Britain. It was a dirty and crowded industrial city. Ryland Road was an area of “back to back” housing; high density clusters of very small attached houses, built back to back and surrounding a communal courtyard. It was crowded and dark. Since three of the four walls were shared with other houses the lack of windows resulted in poor ventilation as well as low light. It was a harsh environment for poor working class families; disease and malnutrition were common 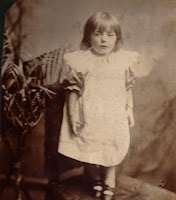 In the 1901 census, Elizabeth, her parents and her two brothers are shown still living on Ryland Road with Harry working as a general labourer in a lumber yard. The house contained only three rooms and the toilet facilities were likely outside and shared with the neighbours.

Elizabeth was the second child of Harry and Jane, her older brother William was a little more than a year older than her having been born on January 9, 1896.
In the next nine years Elizabeth was followed by three more brothers, Edwin (Ted) born August 19, 1900, Albert born September 4, 1904 and Stanley born January 16, 1906. Her mother had many unsuccessful pregnancies as well, once telling her great-granddaughter-in-law there were twenty-two confinements in all. Infant mortality was high in Birmingham in those times. There is no official record of stillborn births until 1927 which limits research in this area. Perhaps more information could be found in the parish records.

Young Elizabeth had a few adventures. While attending Bristol Street School, she used a slate board and slate pencil. She “carried 4-5 stitches between my nose bridge and left eye where my slate broke up as I fell up the wide steps to the school door”. She also remembered how they used to salute the Union Jack before entering the school “it kept us proud”. In re-visiting the site in 1954 she “closed my eyes and expected to see Miss Coomes looking down at me from the balcony”.

Elizabeth also told of climbing the bridge on Pritchatt’s Lane, slipping and falling into the canal below, where a barge man pulled her out with a long hook. She ended up 2 days later in the Fever Hospital. (This was likely the Birmingham City Infectious Hospital, which handled scarlet fever cases) She told of "going up The Cut (canal) in a coal boat".

A happier memory involved the annual Lord Chamberlain’s children's summer party at Highcroft where he received them in his wheelchair with an orchid in his coat. "All the children had a bag of candy and an orchid from his greenhouses to take home to their mothers, after a tea party and a tour around his beautiful rose gardens." 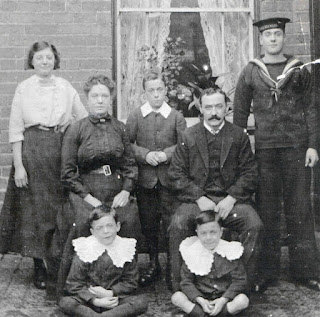 Very early in her life, as the only daughter, Elizabeth had a lot of responsibilities including many of the household chores and helping to raise her younger brothers. Likely her mother was indisposed much of the time and there was very little money, although Harry always worked hard at a wide variety of jobs to look after his family.

Church was always present in Elizabeth’s life, beginning in Sunday school at All Saints Church nearby. Throughout her life she sang and participated in the local church wherever she resided.