Elizabeth (Bess) Blaney’s parents, Harry Blaney and Martha Jane Elcocks were married July 9, 1895 in Birmingham, England; he was nineteen and she was eighteen. With the exception of a year in Canada (1929-1930), they lived out their lives in Birmingham. Harry lived to the age of seventy-nine and Jane until age eighty-four. Life was difficult due to little income, the quick start of their family and it remained so throughout.  Also, public records indicate that Jane was pregnant at the time of the wedding which would have been scandalous in these Victorian times.

Harry was a hardworking father, at times a house painter, a granite layer and a leatherworker. He was a strong, healthy and very active man, always providing for his family.
While she was very close to her father, Bess’s relationship with her mother was not so good. Her stories of her father were always affectionate and plentiful. Bess was a “daddy’s girl”, being the only girl in the family for nineteen years.

I know much more about Harry than I do about Jane, thanks to an interview of family members by one of my cousins. In reading Bess’s journals and remembering her stories of him, he seems to have been a strict but fun loving parent with some unorthodox child rearing methods.

She told of him insisting that she and her brother settle a difference between them by getting into their homemade boxing ring and duke it out. Harry had trained all his children to box including his daughter due to the rough neighbourhood in which they lived. Bess was astounded when she knocked out her brother, Ted. That feistiness would come to the fore eighty years later when Bess confronted an intruder in her home. 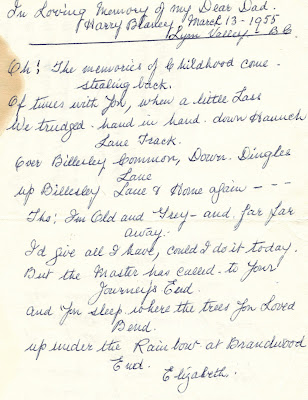 Both her parents liked their drink and there were some extended family brouhahas as her uncles joined in with much shouting and a few punches thrown as a result.

At the age of ninety-one she recalled that one of her mother’s sisters was good to her “when things were battling at home”.

Bess’s mother, Martha Jane Elcocks was born in 1877, the youngest in a family of ten children. She had eight sisters and one brother. Jane’s father was William Elcocks and her mother was Martha Bellingham.

Among Bess’s papers was an almost complete newspaper clipping from the Daily Montreal Star dated May 27, 1924. It led me to discover, through research of the micro-film copy of that newspaper, that at the age of twenty-seven, with two young children of her own and only having lived nine months in Canada, she wrote a letter to the editor on the subject of mothers and daughters.

It said in part:
“Being a reader of your mail for some time and always interested in letters to you, I will try to express myself in reference to articles written on mothers. That dear name! How many, I wonder, know what that name means. Some refer in your mail to good and bad mothers. Let me say: Keep the flag flying to the first and lower it to the second, and let those who have the first mentioned mother hold tightly, cherish, honor, love, obey and in heaven’s name, be worthy of her no matter whether they are girl or boy, woman or man.

How many realize the full value of what they have? But I wonder if some of those people who have “The One Mother” with whom I wish we were all blessed with, understand the untold suffering, misery and hardship that the children of the other mother have.

Do they realize that many, many pleasures, however small, would be forfeited if they were the other unhappy creatures who wonder sometimes why they were born at all? Do they know how many a heart aches to have the “One Mother”? ……..The ones who have “The Mother” sometimes do not appreciate her, and the mother who doesn’t care a rap may have the best of children and not appreciate them. I wonder why?

How can anyone having had a good mother understand the inward suffering, heartache, the cloud that shuts out all sunshine, the coldness, the loneliness that fills the life of some of their less favored sisters and brothers?”

The letter goes on, I believe, to speak further to her relationship with her mother especially around the time of Bess’s own marriage.

Bess and her husband Harry made their only recorded return visit to Birmingham in September of 1954. In a letter written in 1988 she mentions that she was glad she managed to see her father during that visit, which was about six months before he died.

According to the England & Wales Death Index, her mother Jane’s death was registered between October and December 1961. There is some uncertainty as I found only one reference to her death in Bess’s papers, where the date is listed as April 24, 1958.  A copy of the death record will be needed to confirm the correct date.