With alcohol, Harry knew his limits, most of the time. His son Edwin (Ted) told his family a story of how Harry could be bribed with jugs of ale, whenever Martha wanted him to stay home with the children (about 1900 when his children were small) whenever she and her sisters wanted to go shopping.  Harry would sit with the children telling them stories and drinking his bribe while waiting for the women to return.

Harry had a sense of humour and was a great story teller, not only to his grandchildren, but also to his friends.” For example, he told his grandchildren that he fought in the “Zulu War”, which he never did. He told them he sewed the lips of the natives so they wouldn’t make any noise but of course, he’d never been to Africa, ever.

But then the women, also, would have a few pints on their way home. When they would finally arrive at home, in the early hours of the next morning, bedlam would be the result. Harry would “have a go” at his wife for being late and she would “give it right back to him” - but he could always get the better of her. Then Martha Jane would send some of the children to get one of her brothers-in-law to help her.

When the children and brother-in-law returned, rather than being afraid, the children would laugh heartily when expecting the follow-up ruckus. First, the “uncle” would protest the fighting, then, Harry would respond to his efforts to create peace by tossing him through a window. Harry had done this many times and would do the same to any other man who ever tried to intercede.

All the while the children would be unafraid, all laughing at the spectacle. As a last resort, their grandmother – Harry’s mother-in-law - would be asked to step into the fray.  Harry’s son, Edwin, witness to many a fracas, reported that Harry often said he was afraid of “no man nor beast, but, … Edwin then would pause, raise an eyebrow, then add mischievously, “ except for his mother-in-law.”

Harry looked after his health.  He never smoked. He always said, “If man were meant to smoke, he’s have been born with a chimney on top of his head.” He liked “the ladies,” but he had no interest in birth control. Grandmother Martha Jane revealed in a whisper to her grandson John’s wife, Sheila Blaney, “I had 21 pregnancies.”  Of these pregnancies, only six reached adulthood.

Her youngest son, Alfred, lived to age 22, dying during WWII in Battle of Jubilee at Dieppe, August 19, 1942.  Alfred was a coxswain in the role of Acting Leading Seaman on the landing craft of HMS Dinosaur when there was an explosion. At the time they were transporting ammunition for the Canadian 6th Cavalry’s tanks. Sadly he left behind the woman he had married in Scotland just six weeks before, Lily Scobie Wilson.

At the age of 21, Alfred (Alfie) had already been awarded the Distinguished Service Medal in recognition of “…gallantry during active operations against the enemy at sea…” during the battle of Crete in 1941. After the war, Harry, Martha Jane, Alfie’s sister Louise and his widow, Lily, were invited to Buckingham Palace to receive this medal from the Queen.

During the bombings of World War II, Harry helped not only his family, but also his neighbours to survive German bombing raids, when he volunteered as an Air-Raid Warden.  (Son Stanley followed his example in Canada.) His job was to go out and check that no lights were visible to those in the German bombers above. Harry didn’t want his family to risk the trip to the public air raid shelter, so he built a shelter for them by digging into the ground at the end of his garden, then lining it with concrete.  Grandson John told of how, towards the end of the war, he got very angry with “the Jerries.” for causing such disturbances.  In protest, he refused to enter ANY shelter and stayed inside his house, in spite of family protests.
Eventually, when Harry was old and infirm, “the ladies” remained one of his fascinations, but his attentions weren’t reciprocated.  Grandson John, who loved Harry deeply, laughingly said “Grand dad couldn’t keep a homemaker to care for him, because he wouldn’t stop trying to pinch their bums.”

Harry was a very fair man and also very clean for a man of his social background and age. He bathed and changed his clothes on a regular basis. (In contrast, his granddaughter Patricia learned in 1954, when working in the North Vancouver Hospital, that some old-time loggers in Canada, would still don their long-john underwear in the fall and wouldn’t take it off until the following June, for fear they would catch pneumonia and die!)  Harry didn’t share their views.

When not at work, he usually changed into a dark navy blue suit, an oxford-style striped shirt with a white collar and a polka dot tie, a waistcoat (vest), a watch chain and fob. He also shaved before going out in public. He retained his own teeth for much longer than most people, brushing daily with salt and flossing with thread.  His daughter, Elizabeth, told her niece Patricia that, many years ago, when most used “outhouses” in working-class neighbourhoods, Harry installed one of the first toilets in their English neighbourhood.  He located it in the alcove under the hallway stairs, the only place there was room for it in one of their rented “council houses.” 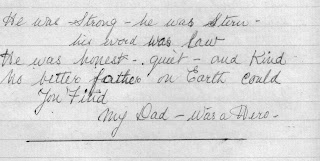 Today, some would judge that he abused his children by using his belt to spank them, but that was usual for most parents in Harry’s day.  Parents then believed they were “spoiling” their children if they didn’t spank them when they disobeyed parental orders.  Children were to be “seen and not heard.” Yet, Harry also would use some of his meagre earnings to buy treats for his children on paydays.  He spent time after long work-days teaching them survival skills in very difficult times.  Though he was a working-class man, he inspired long-lasting love in his children and in his grandchildren.  His daughter Elizabeth (Bess) wrote several poems about him including this one; her hero.

He was a good, loyal, hard-working friend and neighbour, which was affirmed by the words of some elderly former friends and neighbours, with whom son Albert, granddaughter Patricia and her husband Tom shared stories in Birmingham’s “Three Magpies Pub,” during a visit to England in July, 1989. He was still remembered by them, long after his death on March 13, 1955. We felt an awareness of Harry’s presence in this pub where he often socialized and willingly shared his laughter and talents.

We Canadian relatives, still wish we could have known him, in person because in his own era, in his own style, he made his English Victorian world a better place to be.
Posted by Margaret at 3:56 pm