Elizabeth (Bess) Blaney told her niece that she had met the man she would marry while they were both working for the same family. She was the baby nurse and Harry Welch was the family chauffeur. In one of her journals she described it as "love at first sight".

Bess started her working life pretty young, as was common amongst working class families of the early 1900s. I remember my Dad telling me he began working at the age of twelve in Sheffield, England in 1924.While the 1911 census tells us Bess was a pinafore machinist at the age of fourteen; she spoke more often of being a baby nurse at the age of sixteen. She was in service to two affluent families in Birmingham between 1913 and 1915.

Firstly, there is a photo in her album which she had labelled “Age 16 - Clive Weaving”. I found that the England and Wales Civil Registration for the period July to September 1913 shows a record of the birth of a Clive Weaving born in King’s Norton, England. Bess would have been just over age sixteen then.

She also wrote about a position she had acquired with the help of her namesake and paternal grandmother, Elizabeth (Langley) Blaney. Bess’ grandfather, Edwin Blaney had died quite young, leaving his widow Elizabeth with five children to raise. She became well known in Birmingham amongst “well to do people” working as a dressmaker. Young Bess was an accomplished seamstress herself, making silk cushion covers for her grandmother from dress fabric remnants.

Bess described herself as about seventeen when she “went into service in a rich house who granny served for”. This would likely have been in the spring of 1915 shortly before her grandmother died at the age of seventy-seven.

Bess proudly told the story of going into the Lewis (whom she described as being "of the gun family") home and being surprised to see a picture of her grandfather in a top hat and long coat, standing by a horse saddle that was on a stand.The saddle had been made by her grandfather, Edwin Blaney, for Queen Victoria, while he was in the employ of Lamplugh and Brown, a saddle company at 135 Great Colmore Street in Birmingham. According to the London Gazette, August 26, 1891, Lamplugh and Brown was dissolved when Mr. Brown retired. Subsequently, James Alfred Lamplugh formed Lamplugh and Co merging with Middlemore Saddles in 1896.

Mrs. Lewis was Agnes Bertha Brown (born 1871), the daughter of George Frederick Brown (born 1842) who was a wholesale saddler according to the 1891 census. In 1892 she married Ernest Charles Lewis (born 1868) who was a gun maker as was his brother and their father before them. Their youngest daughter Hiliary was baptized April-June 1915 in King's Norton. The other children in the Lewis family were Ernest age 22, Hilda age 19 and George age 13.

I don’t know how Harry Welch came to work as a chauffeur for the family between 1911 and 1915 but I do know that throughout his life he was mechanically inclined and he liked motorcycles and automobiles.

By 1900, the first all-British 4-wheel car was designed and built by Herbert Austin in Birmingham.Only the wealthy could afford the first automobiles and they generally employed a chauffeur rather than driving themselves. The chauffeur usually lived on the property receiving board and lodging in addition to his pay. He drove, cleaned and maintained the car and needed mechanical skills to deal with the breakdowns and tire punctures that were common in the earliest years of the automobile. 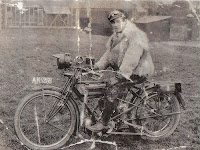 Some bicycle manufacturers moved on to building motorcycles and by 1902 there were three companies in England producing them. Harry would go on to serve with the Motor Transport Co of the Army Service Corp in WWI in 1917 as a driver. Here he is on a “Trusty" Triumph motorcycle, the chosen vehicle of the Allied Troops at that time.

Harry Lewis Welch was born at 4 Lorne Terrace, Argyle Street in the Aston district of Birmingham on March 30, 1893. He was from a much smaller family having only one sibling, a sister Amy who was born April 11, 1897. She was almost the same age as Bess.
Harry and Amy’s parents were Harry Welch (b. January 4, 1871-1946) and Mary Ann Lewis (b. 1871-1955) who were married in Aston June 12, 1892. I have not researched his mother's Lewis family broadly enough to determine if perhaps a family connection is the link to Harry's employment as a chauffeur.

In 1911 the family was living at 316 Park Rd in the Hockley area of Birmingham, about ten miles north of the Blaney home in King’s Norton. His father and mother were both age forty, Harry was eighteen, his sister Amy was thirteen and his uncle, Thomas Lewis, was shown as a twenty-eight year old boarder. Thomas was the brother of Mary Ann and had been living with the family since at least 1901 at which time David Lewis, another brother of Mary Ann's, had also boarded with them. In 1911 Harry, his father and his uncles were all brass workers. Harry and his uncle Thomas were both brass hinge dressers and as such they would have worked in a foundry removing the flash and other unwanted bits from the brass castings of hinges.


Harry’s grandparents were William Andrew Welch (b 1835-1890) and Mary Ann Barnes (b. 1835-1905). They had five children so he had a couple of uncles on his father’s side of the family as well as those on the Lewis side. Harry did not know his grandfather William who was a bricklayer and died before Harry was born but his grandmother Mary Ann lived until 1905.

It was common in the Welch and Lewis families for adult siblings to live together. For example, in 1891 Harry’s father was living with his sister Polly and his future wife, Mary Ann Lewis. The census showed Polly’s profession or occupation to be “umbrella furniture”- an interesting occupation. Mary Ann Lewis was shown as a lodger working as an ammunition worker. Harry’s father and Mary Ann Lewis were both aged twenty at the time and would be married a year later. There was also a child, Lizzie Welch age 9, in the household who oddly, was shown as a granddaughter of the head of the household, the single, twenty five year old Polly. Lizzie is shown as born in Aston but I have yet to determine who Lizzie’s parents were.

Harry was likely a dashing figure to the eighteen year old Bess; a little older, with a good job, fun loving with a good sense of humour and driving a motorcycle. He was a little taller than Bess with a slim build, dark brown hair and blue eyes. Harry was also a great dancer.

Harry won a dance contest in 1914, in Birmingham, receiving a set of silver plated apostle spoons as a prize for his waltzing. 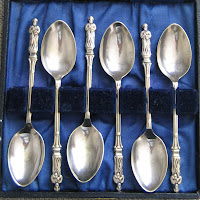 Wealthy Godparents and other relatives gave silver spoons as christening presents, hence the phrase “born with a silver spoon in one’s mouth”, suggesting a child will never be without money. This tradition has its roots in an even older custom. From the mid-15th to mid-17th century, spoons cast with one of the 12 apostles were often given as christening presents. These apostle figures were identifiable by the symbolic object they carried – St. Peter held a fish or a key, St. Andrew carried a cross and St. John had a chalice etc. The typically faceted handles and the bowls were generally made from one piece of silver. The figure was attached to the finial with a ‘V’ joint.


Harry's prize was presented by Gerti Gitana who was a very popular British Music Hall performer. She began singing in public at the age of four and by the age of seventeen she was a headliner. Her first gramophone recordings were made in 1911 and she was known as the Force’s Sweetheart during WWI often entertaining the war wounded in hospitals.I am happy to own these prize spoons given to me by my grandmother, Bess.

Harry and Bess made quite the couple on the dance floor but she often had to share him with other women who had boyfriends or husbands who didn’t dance, this she didn’t particularly appreciate. They both continued to love music throughout their lives.


During their time off work, they went on picnics with friends and coworkers. Harry would take Bess riding on his motorcycle but her parents did not approve and she told her niece that she would climb out the bedroom window and down a nearby tree to meet him.

This was the beginning of their fifty-five year adventure that would take them many miles together by motorcycle, boats, trains, planes and automobiles.
Posted by Margaret at 10:58 pm