New Years Day dawned on a Saturday in 1916. It was a warm and damp one since it was an extremely wet winter in England. There were record rainfalls from December 1915 to February 1916 with January being one of the mildest months that year.

Elizabeth (Bess) and Harry Lewis Welch were two weeks away from their marriage which would occur on Saturday, January 15th at the Birmingham Register Office located at 46 Newhall Street.

The Register Office likely consisted of a couple of rooms within the large corner building that housed other local government departments. One room for the Superintendent Registrar’s office where ceremonies would take place and a second room used for keeping birth, death and marriage records as well as any administration work.  Registrars of birth and death records worked from their homes in those days. 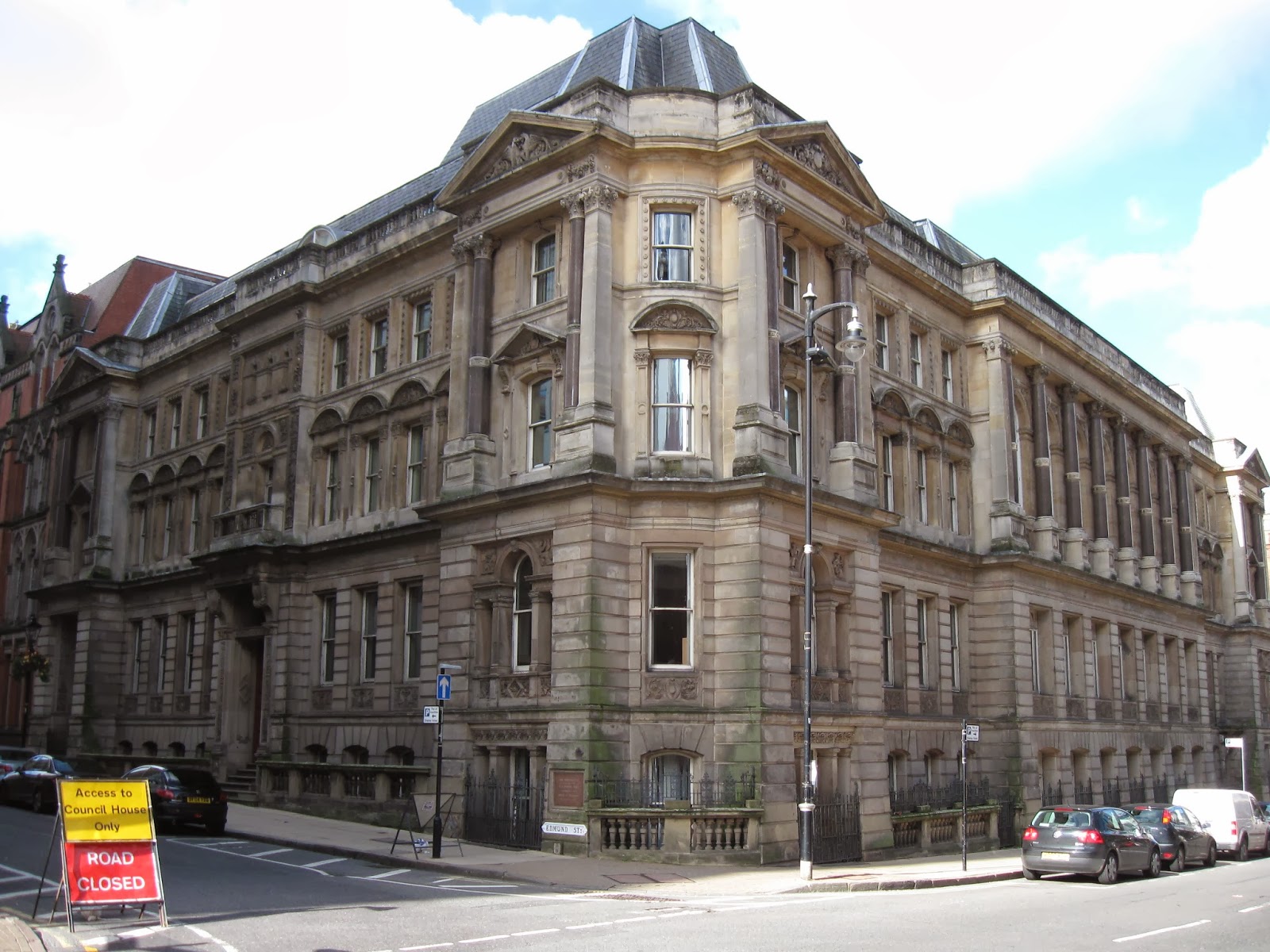 The entrance to the Birmingham Register Office was on the right side of the building and you entered from the left side of the building, facing onto Edmond Street, to reach the King’s Norton District Register Office.             This photo is from the Birmingham Register Office.Very little is known of Harry and Bess’s life 1916 as there was never any talk in the family about that time. Although we knew that Harry was not close to his parents, it was always thought that this was due to his later leaving the country but perhaps it all started in 1915. I grew up being told that Harry’s sister Amy was around to “spoil” Harry and Bess’s son when he was very young.
Christmas festivities must have been difficult. The upcoming marriage may have been kept a secret. The family relationships would likely have been at the very least, strained. Perhaps Harry or Bess were estranged from some members of their family. Even if they knew about it family members did not participate in the wedding.

Harry and Bess needed to visit the Register Office before Christmas 1915 in order to meet the civil marriage regulations regarding giving their “notice of their intent to marry”. They were anxious to marry and likely concerned about the three week waiting period. After recording their information, the Registrar displayed the notice in the Register Office for twenty-one days so that anyone who wanted to could object to the marriage. On the twenty-second day a certificate was issued allowing Harry and Bess to marry within the following three months.

Harry and Bess’s marriage probably occurred in the early afternoon. Theirs was the fourth of five ceremonies conducted at the Office that day. It didn’t take long and being a civil ceremony did not include any religious readings or hymns. In 1916 marriages could only occur between the hours of 8:00am to 3:00pm and after the fifth marriage, the Superintendent Registrar had to leave the office to conduct another marriage at a nearby chapel.

I am sure Bess would have preferred the traditional local church wedding with banns being read and family and friends attending. I had often wondered why my grandmother’s photo collection did not include the expected wedding photos.

I would like to thank Mr. John Yates, Genealogist with the current Birmingham Register Office for his kind assistance in confirming the details of this marriage along with the inner workings of the Register Office in 1916 and some photos.. It allowed me to understand Bess and Harry’s experience, as written above.

I have a certified copy of their marriage registration that shows Harry Lewis Welch to be 22 years of age, a bachelor, working as a munitions worker and living at 3 St. Margaret’s Place, Alston St. Birmingham, the address of his parents Harry & Mary Ann. His father, Harry was shown as a foreman brass worker. Elizabeth Jeanette Blaney was 18 years of age, a spinster, also working as a munitions worker. Her address was 3 Branston Avenue, Sherbourn Road, Balsall Heath, also the address of her parents. Her father Harry Blaney was a saddle presser at the time.

The document includes the names of the witnesses to their marriage who were Edith Fanny Burdin and Alfred Harry Kirby. Mr. Yates was able to advise me that there is no record of them having worked at the Register Office which ruled out my thought that the witnesses might be people working there.
I subsequently found 1911 census records for each of them showing both Edith Fanny Burdin and Alfred Harry Kirby, were about Harry’s age and living in Ladywood, which is also in Balsall Heath. Alfred was working in the brass trade as was Harry’s father. Since I have not found them amongst my family history research I now believe them to be friends of Bess and Harry.

In 1916 Birmingham, the war was very much in evidence. Harry had enlisted under the Derby Scheme and was in the Reserves but not yet called up to service, so he was still able to live at home.

During the war German Zepplins (rigid frame airships-dirigibles that preceded the 1930s Hindenburg) were used to bomb and scout in England. They were about 500 feet long with three engines. They flew at about 50 miles per hour above the clouds, carrying machine guns and bombs. They were targeting Birmingham because of the importance of its munitions works. The year before, the city had taken the precautions of banning external advertising lights, shaded their street lamps and covered their skylights as well as dimming the lights on their trams and buses. So on January 31, 1916 the Zeppelins were unable to find the city and bombs fell on neighbouring areas instead. Most of the bombs fell in open countryside and while none fell on the inner city of Birmingham, it was frightening nonetheless.

At the start of the war, food shortages were self-imposed. People were panic buying food and hoarding it at home. Some shops sold out of food in days in August 1914. However, after the initial panic buying, people settled down into a routine and food was not a problem until 1916. Britain continued to import food with the main exporters to Britain being America and Canada. Up to 1916, these merchant ships travelled in relative safety but the Germans then introduced submarine warfare and merchant ships were frequently being sunk having a drastic impact on Britain's food supply.

It was a bleak year for families with food being in short supply. Prices rose and by October 1916, coal was in such short supply that it was rationed according to the number of rooms a family had in their home. The government then tried to introduce a voluntary code of rationing whereby people limited themselves as to what they ate with the standard being set by the Royal Family. However, this did not work. Those who worked in the munitions factories did not have enough food while anyone with money could get plenty of food on the black market. Any land that could grow food was converted to do so - gardens were turned into allotments and chickens were kept in back gardens.

By 1918 food shortages were a serious problem. Malnutrition was seen in poor communities and as a result the government introduced formal rationing that year. Food products were added to the list of rationed goods as the year progressed. In January, sugar was rationed and by the end of April meat, butter, cheese and margarine were added to the list. Ration cards were issued and everyone had to register with a butcher and grocer. Rationing did work. Malnutrition in the poorer communities disappeared and as in World War II, no one actually starved in Britain during the Great War.

For the first few months of 1916, Harry and Bess worked in the munitions factories, worried about the war, suffered the weather, set up their own home and awaited the upcoming birth of their child.