A blizzard dropped 15-20 cm of snow on England, March 27 1916, which hindered travel and brought down telephone and telegraph lines.

Probably most of it had melted a week later when Harry and Bess’s son was born. According to his birth record Lewis Stanley Welch was born on Tuesday, April 4th 1916. He was born at home which was shown as 57 Cranston Rd, Balsall Heath, Birmingham, hopefully with the help of a mid-wife or handywoman.

When it was difficult to afford a doctor or midwife, some turned to a handywoman instead. Handywomen helped women to give birth, looked after children who were sick with fevers, and laid out bodies in preparation for burial. There was no actual charge for the services of most handywomen, but people gave what they could afford. There was much discussion about the need to increase the income of midwives if they were to be a profession and provide pre-natal care as well. I am not aware of any family lore about it being a difficult pregnancy or birth though.

Lewis’s birth record noted that Harry’s occupation at the time was motor machinist. As previously told in Harry’s military story, he had enlisted on the last day of the Derby Scheme on December 11, 1915. He then returned to his home and civilian employment until January 15, 1917 when he was called up to Army service. He was stationed at Salisbury in south eastern England and he served in the Army Service Corp as a despatch rider.

Lewis would have been about nine months old and Bess would have been very early in her pregnancy with their second child when Harry had to leave. Perhaps with the use of his army motorcycle or the railroad, Harry was able to travel the more than 100 miles back to Birmingham occasionally, if his leave time allowed. For a time he served in Swindon which was a railway network hub. 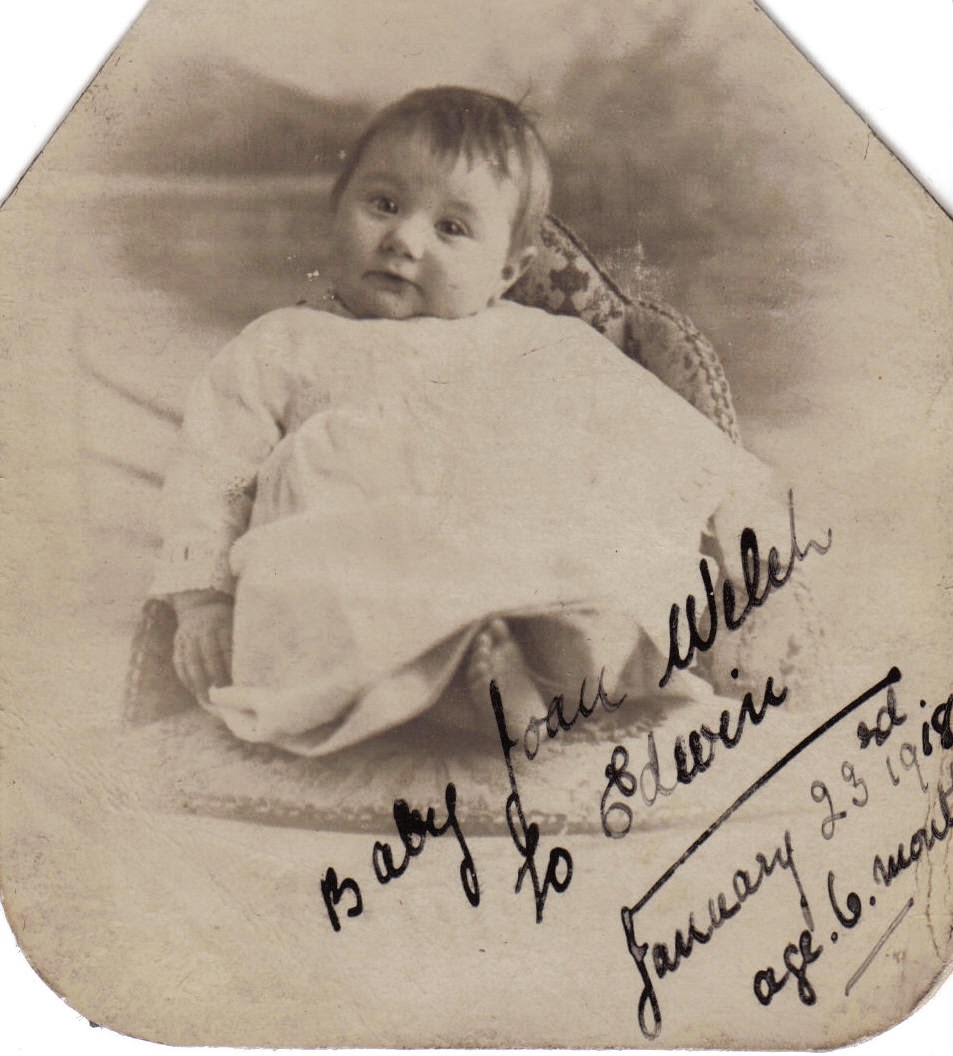 Lewis Stanley was baptised at All Saints Church, King’s Heath on Friday February 9, 1917. He was named after his father’s middle name which was his Grandmother Welch’s maiden name. His second name was for Bess’s youngest brother at the time, Stanley Blaney. I do not have a record of his godparents and it is not known if Harry was able to attend the service.

A sister for Lewis, my mother Joan Margaret Yvonne Welch joined the family in 1917, born also on a Tuesday, July 24th.   Her place of birth was recorded as 41 Silver Street, King’s Heath.

At the time of Joan’s birth registration a few months later Bess reported their home to be 16 Fairfield Road, King’s Heath. Fairfield is a short street and number 16 is in a group of old two story row-houses. It is only a couple of blocks from there to 41 Silver St. which was not far from the corner of Fairfield and Silver. Most of Silver Street also appears to have been row-housing, which was the most common form of rental housing at the time.

Maybe Joan was born at the home of a friend, at the location of a midwife or handywoman or perhaps the family had moved during the intervening weeks and she was actually born at home. My grandmother Bess told me many years ago, when my fraternal twins were born, that my mother Joan was a fraternal twin and her sibling died at birth. There was no discussion about an early, difficult or dangerous birth, but it would have been at least unusual, likely early and not so common as today.

While I have a copy of the registration of Joan’s birth, so far, I have been unable to find any record of it being a twin birth, because prior to 1927 still births were not recorded on the birth or death registers. I have not yet been able to search the original parish records in Birmingham to see what information is recorded there. My mother has always known this but now at the age of 97 is not able to furnish any details including whether the other twin was a boy or girl.   Perhaps she never knew. As is often the case in family history research, anyone in my mother’s life who might have been able to confirm this is no longer living. A cousin of mine also heard about this from her parents and our grandmother. There is a history of multiple births in our family and one of Bess’s sisters Louise Blaney Darby’s pregnancy also resulted in a multiple birth in 1946. In the mid 1940s the incidence of twin births in England and Wales was just a little more than 1% of all pregnancies. There were less than 100 triplet births and only a couple of quadruplet births.

Joan was baptised on August 17, 1917 at All Saints Church , King’s Heath. Her godparents were listed as Blaney and Blaney on the certificate (no first names are shown).

Twenty eight years later Bess would reply to a Toronto newspaper article about children being born with fully grown teeth at birth. She wrote “my daughter was born with four full grown teeth, two upper and two lower front which she kept until seven years old”.  At the time doctors attributed this to too much calcium in the bones - Joan had many falls in her eighties and nineties with thankfully no broken bones. We are not sure who Joan may have been named after. She always said she was named after Joan of Arc.

Harry was discharged from the army on May 7, 1918 when Joan was less than a year old and Lewis was just over the age of two. Near the end of Harry’s service he was working in the vehicle repair shops at Swindon, Larkhill and Reading. Swindon is located between Bristol and Reading (40 miles in each direction) and about 81 miles from London. He was discharged for medical reasons “being medically unfit for war service at Home” He did not receive a pension, likely because he was able to do some kind of work after he was discharged or his condition existed prior to the war. Harry would continue to have health problems throughout his life that would limit his physical ability to work.

They of course lost his Army pay and any separation allowance Bess might have been getting so their income would have been limited. Likely she returned to work when Harry was discharged but thousands of munitions jobs had disappeared when the armistice ended the war on November 11, 1918 (the eleventh hour of the eleventh day of the eleventh month). So far I have no information as to Harry’s employment for the next few years and Bess continued to work outside the home most of her life.

My grandmother and mother often told of being housewives without the benefit of various modern inventions. It was a full-time job involving a lot of hard work scrubbing and polishing. Joan always washed her floors on her hands and knees even when modern tools would have made the job easier. Laundry was hard and tedious as well as time consuming with few houses having hot water. First the water had to be heated; the washing was done in a tub, agitated by hand, scrubbed on a washboard, pulled through a wringer, dried outside when weather allowed and finally ironed. Food preparation was also time consuming as there were no “convenience foods”. There were no fridges or freezers so there were almost daily trips to the shops. Of course there were also child rearing duties.

The family moved several times over a fairly short period of time, most likely there were difficulties paying the rent or needed help from the home parish. My mother remembers when she was about five years old (1922) that the removal van was actually a horse drawn cart.

In the next few years Bess & Harry lived either in Balsall Heath or King’s Heath, moving back and forth between:
I have been able to track these addresses through birth records, discharge papers and electoral records. Electoral lists were created almost annually except during both world wars 1914-1918 and 1939-1945. Men over twenty-one and women over the age of thirty who met the property requirements were able to vote after rights were granted in 1918. Finally in 1928 all women over age twenty-one won the right to vote the same as men.

Three out of four of these homes were within Balsall Heath which was about four miles south of the center of Birmingham. Located in the north corner of Kings Heath Parish in the early 1900s it was still mostly farmland but with a mix of social classes. Birmingham was growing fast and getting closer. Manufacturing company owners built houses here to distance themselves from industrial Birmingham and live in cleaner air. The Tannery was the largest employer in the 1900s and the area also had good clay for a brick making industry.

The period between 1830 and 1900 saw the growth of small workshops and factories, brass manufacturing, a railway connection to Manchester or London, St. Paul’s Church and two church schools. A police station was established in 1869 and a fire brigade 1878. In 1891 Balsall Heath reluctantly joined what would become Greater Birmingham.
The 1911 census shows a Balsall Heath population of 39,218 residents. It was noted for its friendliness and neighbourly goodwill. There were jobs and entertainments available including the public baths and swimming pool built in 1907 and not long after that silent movie houses arrived. Of course there were always church activities.

Birmingham continued to grow, buses were added to the transportation system and by 1920 Balsall Heath was more of a city suburb than a rural village.

King’s Heath was much like Balsall Heath but was a smaller village. It was about three miles further south of Birmingham and also largely rural in the early 1900s. In 1901 the population was 10,078 and by 1919 it had increased to over 16,000.  There were a few wealthy families, some professionals and many poor people. There were small service businesses and work for servants and estate workers in the large homes of the more wealthy residents. In 1917 there were schools, churches, a police station, a fire station and social life such as sports and church activities.

Unemployment was low but there was a poor working class due to low wages. Workers here made less income than the workshops and factories in Birmingham. 1907 saw improved transportation in the area as electric trams were added to the railway. In 1911 King’s Heath had also joined Birmingham and as Birmingham expanded even further south King’s Heath became a suburb for people from the over-crowded and unhealthy areas of central Birmingham too.

By 1912 cinemas had arrived and by 1915 Colemore Road School was a military hospital while the King’s Heath Board School was overcrowded as they tried to accommodate students from both schools. Attendance was erratic as children helped at home or were working part-time or more.

The years during and after WW1 were hard times with many local people lost in the Great War. It was with great relief that the residents of Balsall Heath celebrated the end of the war with block parties including dancing and beer barrels in the street. Likely Bess and her family joined the nearby celebration on Mary Street, a few blocks from their home.