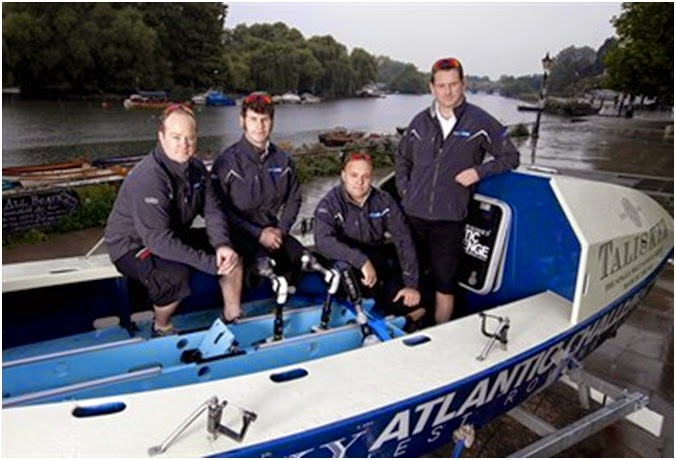 We left off with Scott and his teammates embarking on their epic rowing adventure on December 4, 2013 after a couple of days delay due to threatening weather in the Atlantic.

On the second day of their journey Mark Jenkins reported that while the two three hour shifts from midnight to 6am were demanding, they quickly got into a routine of rowing, cleaning, eating and sleeping. They were off on the adventure of a lifetime and they had the support of families and friends who were there at the starting point as well as many calls and emails of encouragement.

On the third night they were surrounded by many electrical storms displaying the power of nature and leaving them feeling very insignificant. 40 foot waves were crashing over them and they of course worried about power surges causing electrical failures.  They chose to head south east whilst most of the fleet stayed further north.

On day six Scott was awakened at 1:00am to get out the massive parachute that is dumped into the sea to keep the boat in place. The wind was so strong they could not row against it and without the parachute they would drift backwards. The highlight of the day was a satellite call home. When the weather and the huge waves get to him he thinks of the guys who are more injured or didn’t make it and that gets him through it. That thought proves to be a strong motivation for the others as well.

By day twelve they were sixth in the whole fleet and second in their category. They had been suffering horrible weather conditions with high seas for some time, they were soaking wet and had not had any hot food for days. Scott commented on the routine: “you just have to be very disciplined all the time with the nights being the toughest, just horrible”. He was thinking of home a lot and missing his fiancée. “I’ve got to be strong. Just grit my teeth. I always knew this would be tough, but there are times when the experience is just mind-blowing. I’ve just got to remember the reason why we are doing this, for those guys who have been wounded and for their families. I have to remember the pain that they have gone through.” He reported they had seen a shark and lots of flying fish.

On day sixteen, Mark Jenkins described the events of the night before.  “Suddenly there was a huge crashing sound as a wave careered into the side of the boat. I couldn't hear too much from outside but I felt my body thrown from floor to ceiling and back again. The boat had been hit so violently that it pitched completely upside down. Cayle and James had been ejected from their seats and thrown overboard. We always row in life-jackets at night and so we are attached by a safety leash which keeps us attached to the boat even we get ejected into the sea. The boat is designed to re-right itself in a capsize situation. The key things are to keep the cabin doors closed, so you have two air-pockets if you go under, and to have the weight of the ballast water in the storage compartments to help counterbalance the roll. It did the job and we were back up and running. Annoyingly we have lost a few miles in the race. We are only a quarter of the way across and we have already lost a quarter of the fleet, almost all of them to rescue".

Scott called home the day after capsizing and wrote “Dad just said get on with it – he would say that wouldn’t he!”  The weather continued miserable and cold with the crew constantly soaking wet.

On day twenty four Scott reported that the weather was getting better. They had missed Christmas at home but the skip gave them 30 minutes off for Christmas lunch and they exchanged gifts. One sign that they were getting closer to the end was that they were starting to run out of some of their food. On day thirty-one, dinner was a selection of foods from around the world -a mix of chicken tikka, korma, fry up and spaghetti. Unfortunately their bags of treats were lost when they capsized. “Seeing Antigua and our families is always in our thoughts”.

On day forty-three, Scott said “the weather has improved tenfold and the waves are following us in”. Calm weather gave them a chance to call home and get on with the little things that need to be done such as cleaning the boat and watching for sharks. A few days earlier they had seen a cruise liner and everyone was alongside with the foghorn blowing. “‘The World’ was 196m long, about 189m longer than us!”

While he hated the experience at the beginning, he was now loving it. “Being with the crew and bonding together is the best part of it for me. It feels fantastic being in a team again and sharing the high and lows. I am looking forward to small things like losing the beards, having a cut throat shave, a hot shower and some decent grub. I still want to raise the profile for injured service personnel. The most important bit of equipment is my leg – it never let me down”. Both Scott and Cayle had to leave their prosthetic limbs behind to avoid causing damage to the joints from the salt water. They will be reunited with them when they meet their families in Antigua.

Speaking of lessons learned and what the adventure has means to him, Scott said “You can achieve a lot more than you think! This crossing has proved to me what you can achieve with the will to carry on.  Family and friends are the most important thing. What has kept me going has been thinking about my family. I have also thought a lot about my friends and their last minutes. It has been a great personal experience and it has made me more ambitious but the greatest achievement is doing something to sort the wounded lads out. I won’t wish away the time after this and I have learnt a lot about enjoying simple things. The nights are amazing and they remind you not to rush through life. This achievement has also been the experience of a lifetime”.

On approaching Antigua they received a message from General Peter Wall, the Chief of the General Staff and head of the army, who said “This is the most stunning example of courage, grit and determination that the army has seen for a long time.”

After surviving storms, fighting 40 ft. waves crashing over them, experiencing a capsize, sleep deprivation, Scott and Cayle moving around the boat on their bums, eating dried food and ration packs, chaffing and salt-sores and the psychological stresses, they finally reached the finish line. They were second in their class, third overall – an amazing feat!

The reception into English Harbour, Antigua was an amazing end to the challenge. “People going mad and everyone seemed so happy. Coming in at night really set the mood: the flares, the horns, the sunset, it was hard to drink it all in”.

As they approached the finish line five or six boats came out to meet them and in the harbour they were surrounded by boats holding crowds of people. The Antiguan Coast Guard formed a Guard of Honour.

Talisker brand manager, Sophie Brookes said; “Row2Recovery have achieved the extraordinary in completing the Talisker Whisky Atlantic Challenge in third position overall and shown there is life beyond injury."

Later, in a lounge chair in Antigua with his fiancée Amy and a large rum punch he was “feeling that I am the happiest man on Earth. This is something I will tell my grandkids about. I would be lying if I did not say that part of this adventure was for me, but the main reason I did it was to raise awareness of the cause of the wounded soldier. I did this for the lads, for the mates I lost. I did this to prove that you don’t need to lie there in the hospital bed. You cannot lose hope. You need that will power to carry on. I did this to prove that injury is not the end”.

The crew returned to Blighty (slang for Britain, England, Home) courtesy of Virgin Airlines with Scott tweeting that he was home on January 29th. Since returning home they have been involved in radio, TV
and newspaper interviews sharing their experience. They have received congratulations from many sources including the Ministry of Defense.

On February 19th, the Mayor of Nuneaton and Bedworth Borough Council, Cllr. Bob Copland invited Scott into the Nuneaton Town Hall during a full council meeting. Scott was surprised at being presented with two awards for his outstanding achievements. The first was a certificate in recognition of his achievement on behalf of the people of the Borough and the second was a Services to the Community Award for serving his community with distinction. Scott’s fiancée also attended the presentation with Scott receiving a standing ovation from those gathered in the Hall. Clearly his community is very proud of him. “I didn’t realize I was getting two awards. Everyone was up on their feet – it was quite special”

Scott and his teammates were at the River and Row Museum at Henley-on-Thames on February 22, 2014 as they continued to tell their stories and raise funds and awareness. Scott’s fiancée raised over £1,000 while he was rowing and a welcome home party raised another £800. At this writing they have raised over £40,600. The rowing may be over but the fundraising continues at http://www.bmycharity.com/R2RAtlantic2013

On March 10 2014, Prince Harry visited the River and Rowing Museum in Henley where he presented medals to the Row2Recovery crew members in recognition of their taking part in the “world’s toughest rowing race” and their raising thousands of pounds in support of injured soldiers and their families. Prince Harry also had lunch with the rowers and toured the Museum.
Thanks to http://rrm.co.uk/ for the photo. 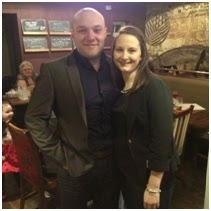 While it may be difficult getting back to a regular life after this great adventure, I expect he will re-live it a few more times as a motivational speaker.  I suppose his next priority will be planning their nuptials with his fiancée Amy and looking forward to their life adventure together. They plan to marry in early August 2014.

I think Scott’s father Peter is correct in thinking that the army sees Scott as an inspiration to other wounded soldiers and probably to anyone facing any kind of life challenge.

If you ever feel the need of a little inspiration you can read more about this adventure on http://www.row2recovery.com/atlantic-blog/2013  where all the detailed blogs from all the team members are posted. Thanks to row2recovery.com for permission to use photos and information from their site.

Many articles about Scott and photos can be found published in the http://www.nuneaton-news.co.uk