It was New Years Day 1920 in King’s Norton and a happy occasion for Harry & Jane Blaney. Their youngest child, Alfred (Alfie) named after his father’s brother, was born that day.

At the time of Alfie’s birth his sister Elizabeth (Bess) was age twenty three and married to Harry Welch with two young children of her own.  His oldest brother, William (Bill) was twenty four; serving in the Navy and his brother Edward (Ted) was twenty. Alfie’s other brothers were Albert age sixteen and working as a brass worker, Stan age fourteen and his sister Louise was about five years old.
Harry Welch had returned from his war service and both he and Bess were working locally at any job that was available, likely brass work for Harry and cleaning for Bess. It was interesting times for their young children, Lewis and Joan though.

The family were living on Cobden Place, Balsall Heath when, as my mother Joan tells the story, fire reels rushed to the Welch home. As best I can tell it was 1921 - she would have been about four years old and her brother Lewis was eighteen months older.

The first sign of trouble was when she heard the fire truck coming down their street. She ran upstairs to look out the window - only to find the bedroom curtains were on fire. Lewis had been playing with matches that he found in the bureau drawer while he was upstairs alone. 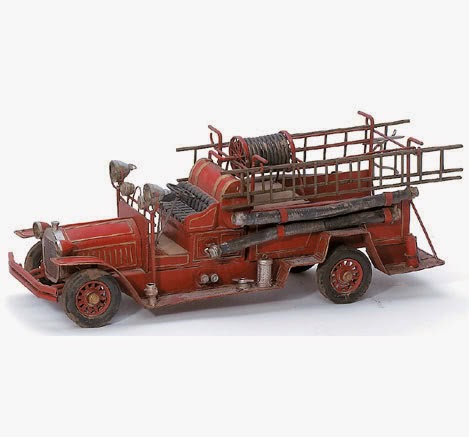 Fortunately the fire brigade was only a few miles away on Moseley Road. The fire station opened in 1912 and still stands. Although it is no longer a fire station it retains many of the original fire hall features.

There was not too much damage, only to the curtains and the bureau; it was likely caught early by neighbours.

Joan says when their mother Bess got home from nearby and their father arrived “there was hell to pay” with Lewis getting yelled at and walloped, although he claimed “he didn’t do it”.

It was not unusual at the time to leave such young children alone in the home with row housing neighbours always close by who all knew and looked out for each other.

I always knew my grandmother Bess was worried about fires but until hearing this story I did not know why.

As mentioned in a previous post, for women without the benefit of various modern inventions, cleaning and laundry were demanding chores with few houses having hot water. First the water had to be heated on the stove then poured into a tub where the laundry was scrubbed or agitated by hand and then pulled through a mandle (clothes wringer).

My mother Joan has a substantial scar on her lower left leg just above the ankle that causes her skin problems even today, more than 92 years after an accident. Her mother Bess had boiled water on the stove then left the pail on the floor before leaving for a few minutes to pick up the children from their nearby school.

Joan said that she had just come home from school where there had been a party and she had won a prize. She was about five years old and so excited that she tripped over the bucket of very hot water that her mother had placed on the floor in preparation for scrubbing it. It seems it was a severe burn as the doctor came to the house that day and for several days afterwards to treat it and it left a 2 by 4 inch scar.

Bess and Joan both believed that later osteoarthritis damage to their knees was from this kind of housework.  Joan continued to clean her kitchen and bathroom floors on her hands and knees until the doctors made her stop quite late in life.  She had two knee replacements and argued with her cardiologist after an incident of congestive heart failure when he was telling her she couldn’t use her vacuum cleaner never mind hand scrub the floor. Bess also suffered with arthritis pain for many years.

My grandmother often told of calling her young son “Lord Fauntleroy” (from a children’s story where a boy discovers that he is the son of a British Earl - the name is sometimes used to describe a young boy who is dressed in fancy clothes or who is unnaturally polite).  She said that her sister-in-law Amy often took Lewis out to visit his Welch grandparents and bought him fancy clothes and treats.

Bess felt that Amy was spoiling him and she should be treating both Lewis and Joan in the same manner. However, Lewis was the first born, the only Welch grandson and he was probably charming even then.

Lewis and Joan were close as seen here.  Always up for an adventure, Lewis had fallen out of a tree and broken his arm.

I was told by Bess that Harry’s parents did not accept her but by 1923 Harry and Bess show their address as that of his parents - perhaps it was temporary until they left the country or incorrectly shown on the passenger list information.

In 1923 life was still harsh for working class families and Harry was considering emigrating. It seems Bess did not agree even though a number of Blaney and Elcocks relatives had already done so. Harry was also being encouraged by a friend of his, talking about the two families going together.

The Elcocks were the family of Bess’s mother Jane Elcocks Blaney. Her parents were William Elcocks (1836-1910) and Martha Bellingham (1838-1914). They were married in 1855 and had a family of at least one son and nine daughters. William was a brewer and reportedly owned a pub.

At least three of their daughters emigrated to Canada between 1919 and 1923 and some of Bess’s Cheffins (one of the Ellen Elcocks married Harold Cheffins) cousins had preceded the Elcocks.

My next post will tell a little about the various relatives who emigrated during that time including when they arrived in Canada how long they stayed and where they settled.
Posted by Margaret at 10:31 pm