On the 21st of March 1922, someone important to Bess (Blaney) Welch, her Grand-Uncle Walter Langley RI, died at the age of sixty-nine.

As written in a previous blog entry, he was a painter, widely known for his en plein air watercolour paintings of the Cornish region. He died at his residence on Clarence St. in Penzance on the south coast of England leaving his second wife, Ethel, their son and the three eldest children of his first marriage.

Walter had experienced an extended period of failing health. His final exhibit was in the spring of 1920 with the Birmingham Society and his last recorded works were two sketches done in 1921.

According to a local newspaper, his funeral was held Friday March 24th and attended by three of his sons (one had died in Canada in 1909); members of the Newlyn Art Colony; friends and members of the Penzance Bowling Club.

Walter was born and raised in Birmingham and began attending evening classes in design at the age of 10. He was apprenticed to a lithographer for seven years. After teaching himself to paint, he attended classes at the Society of Arts in Birmingham. He continued painting in Birmingham and away from time to time, while exhibiting his work there. In 1882, at the age of thirty Walter settled his family in Newlyn, Cornwall after having visited the area several times. He was the first resident artist of the Newlyn School of artists.

Langley was politically left wing for his time and he was noted for his social realist portrayals of working class figures, particularly fishermen and their families. Many of his paintings reflect his sympathy with the working class fisher-folk amongst whom he lived and some of them became his models. His early training in lithography gives his paintings a detail and texture that show his technical skills.
As noted in Roger Langley’s book, Walter Langley, Pioneer of the Newlyn Art Colony, “Langley’s contribution to Birmingham’s art was recognized in the year following his death with a memorial exhibition of 103 paintings at the galleries of the Royal Birmingham Society of Artists. A further tribute to his memory was paid that year by his old friend and sometime studio colleague, William Wainwright, when he made Walter Langley the subject of his Clarendon Lecture to Birmingham students.”

Bess was undoubtedly saddened by his passing and probably knew he was ailing. He was living in Newlyn at the time she was born but over the years he continued to exhibit in Birmingham and gained renown. She was interested in art and knew of and admired his work. Bess was so proud to be a member of his extended family, she being the granddaughter of one of Walter’s elder sisters, Ellen Elizabeth (Langley) Blaney. Bess’s younger brother Albert remembered a visit by Walter Langley to his mother’s (Walter’s Niece) home, when he was a boy between 1910 and 1920.

She likely saw the last work he displayed in Birmingham at the Royal Birmingham Society of Arts in 1922, named “Peeling Potatoes” and perhaps the memorial exhibition in 1923.

She also had some correspondence a Mr. Harper regarding his "Brief History of Walter Langley RI" that he wrote for the Lord Mayor of Birmingham in preparation for the memorial exhibit in January 1923. Bess knew Mr. Harper when she was 16 and knew him to be a friend of Walter Langley, so she wrote to the Royal Birmingham Society of Artists in 1932. Judging by Edward Harper’s reply and given the date, she would have written to him during the time her son, Lewis (age 16) would have been studying at the Ontario Art College in Canada. I suppose she was interested in having more information about Walter to share with Lewis and encourage him in his art. He became a successful commercial artist as well as an accomplished watercolour painter. 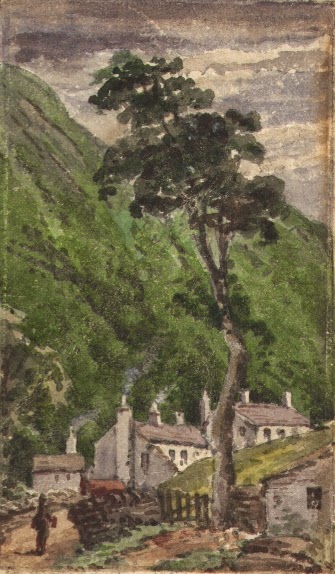 In her later years Bess collected prints of Walter’s work and on a trip to Birmingham in 1954 she visited the Birmingham Art Gallery where she met with Tessa Sidley. The curator showed her his work on display in the gallery and the paintings in the store rooms.  She purchased a large poster of his work which she had framed and it hung for many years in her home until she was well into old age.

She also had an original miniature watercolour of Lickey Hills that had been passed down through her family.

The English economy was still in trouble in 1922 and 1923 with many people on unemployment including 2550 Cornish miners due to mine closures. There was an engineering lockout/strike at the dockyards and even though the cost of living was falling from the very high rates after the war many families were having trouble making ends meet.

In 1922/23 Harry and Bess were living at Cobden Place, Edward Road, Birmingham with the children Lewis and Joan both in school nearby. Bess was working in 1923 but I don’t know about Harry.

He usually did find some kind of work, but it seems Harry at least, was thinking of leaving England.