FIVE FERRIES and SIX COUSINS in SEVEN DAYS Part I 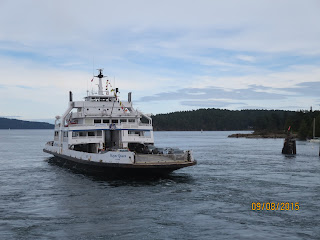 I found some on Facebook.  Some of them Googled their surname and found me through this family history blog. I found out more about them in my Grandmother's photos, diaries and poems. I knew some of them as children but we lost touch for decades.  I thought of them as my “lost cousins”.

Unfortunately my grandmother and her siblings sometimes held grudges and played their family members against each other.  These rifts rippled across the family, up and down the generations.

When I started connecting with my family members online, I had a strong desire to see them again and after a cousin from British Columbia visited me in Toronto, we started planning an old fashioned road trip to see our West Coast cousins.

I found so much more than I had lost, and am so happy that they agreed to meet me and share their stories, art and photos!

We were able to put aside the battles of our parents and grandparents – it felt like our family feuds could finally be put to rest.  I am sad for those who went before us but hopefully we will change the future of our families.

I have been fortunate and happy to have re-connected with my Canadian West Coast cousins.

It began with a visit to my Aunt Eileen with my mother and sister Betty about six years ago. During those few days we were able to spend time with her as well as her husband Ernie and two of her children, Gayle and Colin. We also had a brief visit with my mother`s cousin Patricia and some of her family. I had previously connected with my cousin Roger and his wife Mavis over the internet while working on a family history project.

While Gayle was visiting me in 2014, we had some time to talk about all the lost connections in our family stories. When I told her I was interested in visiting her and others, she suggested she would lead a road trip that would include visits to Salt Spring Island, Nanaimo, Powell River, Sechelt and Surrey. My sister Betty planned to join us and after contacting all the cousins we planned a very ambitious itinerary. We could not be away too long as our mother was 98 years of age and in declining health.

Unfortunately just two days before we were scheduled to leave for Victoria, our mother had a medical issue that would likely require a hospital stay. We could not be sure until after our scheduled flight because we could not get test results back in time being as it was a three day holiday weekend. Generously Betty decided to stay back and be with Mom while I went ahead with our plans.

Gayle met me at the Victoria BC airport then we drove to the first ferry to travel to Salt Spring Island. After we docked it was a lovely scenic drive to her home in Ganges with Gayle telling me about the size and culture of the Island.

On arriving at Gayle`s I was impressed with the amount of her needlework she had decorating her home. It is beautiful with very intricate and detailed designs. At first glance from the doorway I thought they were paintings. It was my first look at the large amount of family art I would see throughout my visit.

I soon noticed the large numbers of deer everywhere on the Island – from roadside to backyards. Also for the first time, I saw a family of Quail walking down the road in front of Gayle`s kitchen window as we had breakfast.

As we toured the Island I was surprised by the amount of mountainous terrain as well as the narrow and winding roads. Many of the homes were difficult to reach which I suppose is what their owners like about them. I was a somewhat disappointed by the lack of sea views due to the very tall tree growth as well as the tall fences and hedges, however we did get a close up view at the north end of the island. 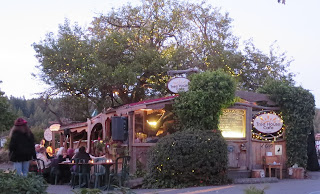 In the evening we walked to town and had a lovely dinner outside the Treehouse. As shown in the photo it is quite small with a tree growing up through the middle. It was a warm night with a great meal of Pacific Salmon and live entertainment. We also enjoyed watching the people wandering through the town. It was so relaxing and I enjoyed seeing ``hippies`` of all ages.


On our return we found a telephone message from another cousin Jennifer who lived along our route up the coast to suggest that we meet her in Ladywood for a coffee on Friday morning. Jenny was not sure just how we were related to her but she had heard about our trip, from her brother Roger.

After enjoying blueberry muffins kindly sent over by Gayle`s neighbour we were soon on the second ferry ride, leaving Salt Spring Island for Vancouver Island.

We had a very enjoyable coffee break in Ladywood sharing some family history and our regrets that we hadn`t known each other before. We took a couple of photos and traded phone numbers and the family blog site information before driving on to Nanaimo where we had lunch with a childhood friend of mine.

Later in the day we took our third ferry -  to Powell River and found the beautiful resort where we spent two nights.

The next day we were warmly greeted by Roger & Mavis at their beautiful glass and wood home in the forest. They explained they had built it themselves over the preceding five years reminding me that our grandparents and my parents did the same in the 1940s. The house is surrounded by many trees which Roger uses in his building and wood carvings.

Mavis is also a wood carver and both paint. I knew Roger`s mother painted but did not know that his father had as well. There is a long list of artists in our families past and present. We were excited to see some of Roger and Mavis`s work. As well as the work displayed in their home, Mavis showed us her large beautiful carved boxes and Roger took us down to his workshop to see a magnificent, very large door he has carved. It is wonderful work.

We enjoyed a delightful lunch in their garden. They explained the fence surrounding the living area of their property was to keep out the bears, deer and cougars that had previously destroyed their plants and trees.

We shared our family history research and talked about the numerous artists in our families. Roger had not seen many of the photos in my Grandmother’s album and I agreed to send him a scanned version along with the details of a couple of books written about our artist ancestor, Walter Langley. We shared warm goodbye hugs and agreed to keep in touch. I thoroughly enjoyed meeting them and hope to see them again.

After a very comfortable sleep and a good breakfast we set off down the Sunshine Coast to our fourth ferry. This one would take us to Sechelt and the next cousin, Gayle`s brother Colin and his family.

After lunch in town we visited Colin`s home, yet another house high up above the water. It was down a steep driveway to the house and the house overlooked a very deep-down backyard and a great water view. I was happy to meet Colin`s wife Melanie, their son Sebastian and daughter Amelie.

In the afternoon Colin and Melanie took us on a cruise along the shore and many inlets of their neighbourhood. We were able to see their house and some others high up and almost hidden by the high trees.  We also saw an abandoned oyster farm and cabin built by a friend of theirs. We stopped there for a cold drink, a tour of the cabin and great conversation.


On the way back we stopped to check Colin`s lobster trap and later we had a great meal of lobster claws, lobster cakes, all the trimmings and dessert, which we enjoyed along with the kids.

We spent some time looking at all our old photos, sharing stories and promising to share copies. I had made a small family history book for Colin`s family which I left for them. They live a very interesting, close to nature, lifestyle and it suits them. After dark we sat out on the deck talking and star gazing. I was delighted to see the Milky Way as well as many other stars. In the absence of city light, they seemed almost within reach.

We enjoyed breakfast together before Melanie left for work. We talked a little more with Colin while he showed us some of his photos of camping with his children on one of their many adventures. Another artist in the family, Colin is a professional photographer. He then advised us what time to leave in order to catch our fifth ferry suggesting we allow enough time to visit a small park on the way to see the salmon run. Sometimes the bears come to feed as well. We had a wonderful visit.

We did stop at the park and as we started down the trail we met a man returning with his small child who was crying because he was afraid of the bear. Well, I could not resist going on, so very slowly, quietly and carefully I walked down the winding trail watching around each curve. I was rewarded with a close encounter with a bear eating salmon, albeit a small bear. It was exciting as I snapped my photo and returned quietly to Gayle who was beginning to worry about where I was.

That photo topped off my list of wildlife I had seen on the trip, deer, quail, rabbits, seals, salmon spawning, and a glimpse of a whale from a ferry then finally a bear.