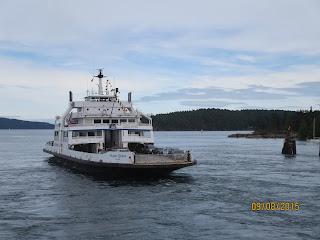 So, on to Surrey via highway, our fifth ferry and highway again: another very scenic trip. We were early enough to get on the ferry but it was very crowded, likely with people taking a Sunday day trip to the Vancouver area. There were many cars left behind when the ship left the dock but not us. By the time we had lunch in the on-board White Spot Restaurant we were almost at Deep Cove.

We took the Trans Canada Highway and on arrival in Burnaby, we called our second-cousin Patricia. We were happy to learn she had arranged a family get-together for dinner at her home. Since they lived only about five minutes from the motel, Gayle and I decided to have a look at touristy White Rock before joining them.

White Rock is on the south shore of British Columbia very near the Canadian/US border. It was very busy but interesting to drive through the town and see some of the residences built up on the hills overlooking the ocean as well as the pier and promenade area.

We stopped to get a couple of bottles of wine to take to Pat`s and when coming out of the shop ran into another cousin, Amie. It was the first time I had met her but unfortunately we didn`t have time to visit. She is the grand-daughter of my mother`s sister and lives in the White Rock area.

After a wonderful day of meeting new family members, good food and many many shared stories we left with plans to leave early the next morning for our old homesteads in Lynn Valley in North Vancouver. Tom and Pat would drive us and it would take about 45 minutes to get there.


It was another wonderful day. First we visited the childhood homes of each of us and I was delighted to see that the house my mother and dad had built in 1947-1952 was still standing though enlarged and updated over time. I could tell because of the ancient chimneys on the roof and the location of the front door. Unfortunately the home next door built by my grandparents had been replaced by a very modern building some years ago. There were still very, very, tall evergreen trees everywhere as I remembered, although the hill in the road always seems smaller when you are no longer twelve years old. I also loved the smell of the cedar.

Our next stop was Lynn Valley Park and Canyon. The park consists of 617 acres of forest and most trees are 80-100 years old. We had all played there as children, walking from home, building bonfires, bouncing on the suspension bridge or even jumping into parts of the canyon. Happily we are all still here to tell the stories. 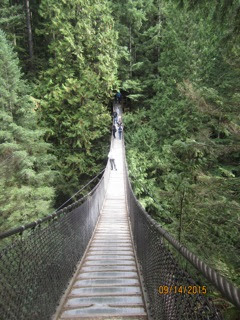 The first thing I had to do at the park was to walk across the suspension bridge and take some photos looking over the sides. The bridge is 60 metres above the creek. Gayle was the most adventurous of us when we were kids, running across and rocking it, to the dismay of her mother but we all loved it then. Since she did not want to go across today, we took a different path, down into the canyon.

Pat was keen to show where our Uncle Albert`s ashes were scattered in the creek. He had many times panned for gold in the creek in the old days although he was chased out a couple of times by the warden in later years. She also told us the story of how the water turned gold when his ashes were placed there.


We took the steps, down to the south of the suspension bridge,which I had forgotten about. They were much sturdier than we remembered them but still were many hundreds of steps with only some flights having handrails. It was tough on the knees and hips. After the climb down to the Twin Falls Bridge we enjoyed the view of the twin falls and Pat took us up along the edge to show us the location where Albert is now resting. We did not climb down to the bottom of the canyon although many people do, as we still had to climb back up the hundreds of steps to get to the parking lot.

After lunch we headed for Highlands United Church in Capilano. This is where our grandmother’s ashes were scattered, in the Memory Garden behind the church. We were able to find her plaque inside the church which told of her being there and I was able to point out her spot in the garden as I had been there a couple of times before.

We paid our respects and then Tom and Pat suggested taking us to visit another one of their children and their grandchildren who lived near Lynn Valley Park. We were delighted to meet and visit with them and see their home and property. I was kindly given a book which included photos of Lynn Valley past and present, which I enjoyed sharing with my family.

After dinner we had another great evening of sharing memories,
photos and family art. In the morning I went back to get a copy of our Uncle Albert`s painting that Pat had on her wall and a copy of a portrait she had drawn of her father. When Tom took Albert’s art of the frame to copy it for me, he discovered another of Albert’s paintings on the reverse side.

A little serendipity occurred when we found that a photo that I couldn’t identify for years was one of Pat and her foster sister.

When her family moved from Toronto to B.C. she had to say goodbye to her foster sister and she never had a photo of her. What a moment for both of us!

After our last cup of tea Gayle drove me to the Airport for the flight home.During the flight I recollected all the wonderful people, sights, and art I had experienced during my 7 days trip.

While there were lots more photos, I had to limit the number that would fit into this blog and sadly there were also the ones I neglected to take.

Thanks to all the cousins who welcomed us into their homes, entertained us, toured us around and shared their family memories with us.

I loved every minute of it!

My next cousin finding trip will be to England and Scotland to meet those whose families didn't emigrate to Canada.
Posted by Margaret at 2:47 pm