The BLANEY BROTHERS in the THIRTIES

While the Great Depression began with the Stock Market crash in the United States October 1929 it quickly spread throughout the world.

In the United Kingdom, it was referred to as the Great Slump. Since the UK had not fully recovered from WWI, it seemed less severe than that experienced in North America, which had seen boom times during the 1920s. Hardest hit was the industrial northern area of the UK. World trade declined and the demand for product exports decreased significantly. Mining and ship building industries suffered and mass unemployment caused severe poverty.

The area around London and the Midlands were less affected. While unemployment was initially high, by the mid to late 1930s the area was quite prosperous. Home building around London was helped along by a growing population in the area and low interest rates. Birmingham was prospering because of their booming automotive industry and the number of cars on the road doubled in the decade.

When Bess' parents, Harry & Jane Blaney returned to Birmingham with their children, Louise and Alfie in October 1930. they were taken in by their son Edwin (Ted) Harold Blaney at 12 Heathfield Road, in the King's Heath area.

By 1930 they had two daughters, Florence (b. 1924) and Margaret (b. 1928) so an additional family of four made it a little crowded. Ted was a leather worker and likely had work during this time. It also came in handy fixing the family's shoes.

Their son John was born in March of 1932 and the 1939 Register shows Ted employed as a boiler attendant and Florence working part time as a shop assistant.

Albert Blaney lived an interesting life. He came alone to Canada at the age of 17 in 1922 landing in Halifax, travelling by rail to Montreal, then on to British Columbia. He had a job offer from the logging railroad that his uncle Michael Murphy (husband of his mother’s sister, Clara Elcocks) worked for in Rock Bay, B.C. It turned out that working “in the bush” as he called it was filled with much hard work and danger, but he loved it.

From 1925-1927 he and his brother Stanley served in the Militia with the 42nd Black Watch Highlanders in Montreal. They also worked in Montreal General Hospital along with their sister Bess before returning to British Columbia.

By 1929 Albert had a floor laying business and he met Helen (Nellie) Atkinson in the Vancouver boarding house where they both lived. She was also new to Canada, arriving in June 1920, age 24, travelling alone to her brother in Winnipeg. She worked there for a short time and then moved on to Vancouver where the weather was not so severe.

They became close as he taught her about photography including developing film. They were married January 12, 1929 and stayed happily together until her death at age 90. 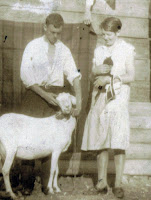 Albert owned some property in Capilano area of North Vancouver gifted to him by his Aunt Clara and Uncle Michael Murphy for his 21st birthday so they were able to live reasonably well during the Depression. The land provided plenty of food and there were lots of salmon in the Capilano River. Albert said “it looked as if you could walk across the water on the salmon. One salmon could last us a week”.

He had numerous ways of creating work for himself and others as well as sharing his land.  He cleared land, built houses and sold honey from his ten bee hives.

From 1934 until 1938 Albert belonged to the Legion of Frontiersmen a version of Special Constables that was for a time affiliated with the Royal Canadian Mounted Police. 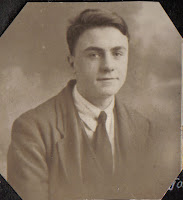 In 1930 Stanley Blaney, was living in North Vancouver with Margaret Kelly Thompson born 1902 in Belfast Ireland. Albert had sent passage for Stan to emigrate to Canada in June of 1923 and the brothers worked and lived close to each other for many years.

Margaret left a troubled life in turbulent Northern Ireland in 1920. She travelled across Canada alone to stay with an uncle in Vancouver where life was not much happier.

A few years later, Margaret was working as a waitress when Stan rescued her from an abusive relationship. He was just 5ft 8in in height but he was tough, strong and hardworking. Since he had no money, car or house, their first home was a converted chicken coop at the back of Albert’s property. Like many other couples in those times they could not afford to marry.

In 1933 they heard there were jobs in Toronto and set off on their greatest adventure. Stories written by their daughter Patricia (Blaney) Koretchuk tell us “Margaret disguised herself in men’s clothes and together they hiked and hopped freight trains 3000 miles across Canada”. She cut her hair very short, wore a vest and long pants, heavy work boots and a peaked hat down over her eyebrows.” Many men travelled this way at the time but it was unusual for a woman to do so. It was a difficult and dangerous journey with many hardships along the way including hunger and evading the railway police.

In Toronto, they lived with Bess and Harry and their three young children for a short time but when it became clear that Margaret was pregnant and unmarried, Bess asked them to leave. She could not afford to compromise her reputation in the church.

Things were actually worse in the city where they experienced hunger as well as unemployment. Stan worked at every odd job that came along, they took in boarders and over time he found steady employment as a leather worker.

Their daughter Patricia was born in Toronto April 23, 1934, they were married and the family stayed there for the next eleven years. They mended their relationship with Bess but their love for the west prevailed and they returned to British Columbia on V.J. Day in 1945.

Thanks to Patricia (Blaney) Koretchuk for sharing her memories of Albert & Stan.

Bess's "big brother" was William ( Bill) Blaney born January 9, 1896 in Birmingham. Bill joined the Royal Navy at the age of 15 1/2 entering as a Boy II on a training ship in 1911 and didn't return to Birmingham to live.

In 1919 Bill married Rosetta (Rose) Amy (Wallis) Huxley whose first husband Henry John Huxley had died in France during WWI. Bill remained in the navy until the end of WWII and they lived many years in Feltham in Middlesex, about 150 miles from Birmingham. 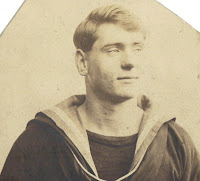 In 1920 Bill received a medal for his part in the rescue of a fellow seaman who could not swim.

In September 1931 near the beginning of the Depression The Invergordon Mutiny occurred. It was a strike by thousands of sailors from about a dozen Royal Navy Warships docked in Cromarty Firth Northern Scotland while participating in a naval exercise.

Rumours were swirling that wage cuts of up to 25% were coming in order to reduce government spending. News of the strike spread upsetting the stock market and undermining the British Pound. It was settled by allowing those on lower rates of pay to remain on the old rate, effectively cancelling the 25% pay cut in favour of a universal 10% cut.

Depending on where they were living and their occupations, the Blaneys suffered to different degrees during this difficult time. Their courage and tenacity served them well.

Next: Growing Up in Toronto