BOOM to BUST - They Called Them the Dirty Thirties 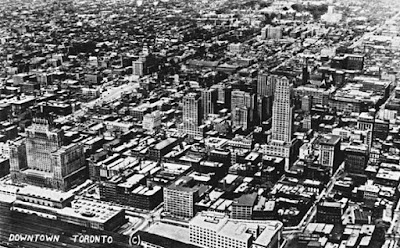 The silver age of the twenties was almost over when Harry, Bess and their three children moved from Brantford to the big city. Toronto had been booming for almost a decade, even the tourists were coming.

Known as a city of churches it was also a financial, manufacturing and retailing centre. There was a building boom with fourteen skyscrapers built between 1922 and 1928 and in June 1929 the sixteen million dollar Royal York Hotel was opened.


Industry was growing, inflation and wages were up, the good times had returned. There were jobs in the banks and insurance companies. Women were now accepted as part of the workforce and 25% of them had work. Many people had a job and a car, so road congestion became a problem in the bustling city and Driver Licenses were necessary.


The 1920s were also a time of “buy now, pay later” for cars, appliances and homes which caused over expansion and over production subsequently resulting in layoffs. Construction was slowing down too.

When he was not ailing, Harry was employed as a brass worker, Lewis age 13 and Joan age 12 attended local public schools. After school Joan prepared dinner and helped care for her four year old sister Eileen while Bess worked a split shift cleaning early morning and late afternoon at one of the large downtown banks. They were renting a small house in the working class Parkdale area of Toronto.

The bubble burst when the Wall Street Stock Market crashed in October 1929. It was the beginning of the dirty thirties. It was the Depression and it was hard times for most.

The Prairies suffered from extreme cold and blizzards, followed by drought and grasshopper plagues resulting in dust storms and crop failure. 100,000 people left to look for work in the cities.Unskilled single men suffered the most hardship during this time.

In Toronto Since 1918: An Illustrated History, James Lemon provides some gruelling statistics. In 1931, 17% of Toronto’s population was out of work and two years later, 30% were unemployed. There was no unemployment insurance, no family allowance and no medicare.

Those working, saw wages drop by 60%, and no overtime.  The federal government set up work camps for single men doing construction work in the bush. Municipal jobs building sewers, water mains and roads by hand, known as “moving dirt”, were created.  Many men criss-crossed the country by hopping on trains and sleeping outdoors while searching for work. Hobos lived in the Don Valley in Toronto.

More than 100,000 people were "on the dole". Public relief agencies provided some vouchers for food and rent (no cash), and soup kitchens provided help. Evictions were common and people moved frequently as there was only help for the first month's rent. To qualify, applicants must have no relatives to help them, be supporting a family, use no liquor, and have no telephone or car.

People coped as best they could. They helped each other, remade clothing, repaired what they had, fed vagrants, took in boarders or shared houses with family members. Large houses were broken up into rental units as 60% were tenants. Young people remained at home longer and the number of marriages fell along with the birthrate. Some lived well as goods were cheap; the value of some products falling by up to 50%.

At one point Harry suffered a heart attack and could not work, causing Bess to sell her engagement ring to raise funds.

However for a number of years Harry was well and he was a skilled and experienced brass worker. He made fittings for Standard Bronze Company, a large manufacturer of lighting fixtures and Bess was working as a cleaner. Some of Harry's brass and copper works remain in the family. 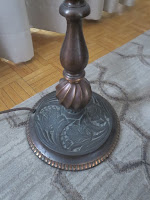 The family were thrifty, for example Harry mended their shoes - they were making ends meet.

Generations who lived through those times carried the lessons throughout their life. Bess and Joan practiced “waste not want not” and "try to keep a little money for a rainy day”. They took care of their belongings, repairing them rather than replacing them and they used electricity and heat judiciously for the rest of their lives.

Harry Blaney was a leather worker and the passenger list notes that the family’s destination was their daughter’s home in Toronto.

It also shows that their fares were paid by the British Salvation Army. The charity made passage available to many poor residents of England to give them a fresh start in the colonies.

Taking the train from Quebec to Toronto, they were met at Union Station by Bess and Harry.

Bess’ sister Louise was just a year older than her son Lewis. They were all living together so Louise, Lewis and Joan quickly became good friends and they enjoyed their time together.

It was the Golden Age of Hollywood and you could forget your troubles with a 25 cent ticket to the movies. Radio was entertaining and widely available. There were sporting events, roller skating and swimming.

The family loved the beach, often taking the ferry to Hanlon’s Point on Toronto Island or the streetcar to the eastern beaches, with family and friends.

Life was not so easy for the parents. Bess and her mother had never been close and everyone living in the same house was likely challenging for all of them.

Unfortunately within a year of their arrival the Blaneys were forced to return to England.

Family lore has it that Jane, while working in a ladies wear shop, had taken something that did not belong to her. Regardless, the passenger list of the Andania shows Harry, Jane, Louise & Alfie listed under the category Deported. Their destination was shown as 12 Heathfield Road, Birmingham, the home of their son Ted Blaney and they arrived in Liverpool, England on October 19, 1930.

Bess was appalled and embarrassed to say the least and it was not spoken about even within the family. However Joan did tell me the story late in her life. Other than the passenger list, I have not yet been able to find an official record of the event.

As written in Whence They Came, Deportation from Canada 1900-1935 by Barbara Roberts, in Canada during the depression, any “new” immigrants (less than 5 years in Canada) not working or being supported by someone else, as well as troublemakers, were deported, often without trials. Between 1930 and 1935, thirty thousand people were deported from Canada. An article on the Libraries and Archives Canada website mentions that never before or since have deportations reached the same magnitude as in those years. Some Canadians, desperate themselves, blamed foreigners for taking away their jobs and using relief agency funds.

Harry and Jane returned to Birmingham penniless and moved in with their son Ted and his family where they stayed for a number of years.   Recently a daughter of Ted’s told me that things did not go very well there either due to many conflicts over her Grandmother Jane’s behaviour.