As mentioned in my February entry, I am now pleased to post Part I of Harry Blaney's story written primarily by my cousin Patricia Blaney Koretchuk. We have very much enjoyed our long distance collaboration and hope it will be enjoyed by other family members. As always any additional information or corrections would be welcome. 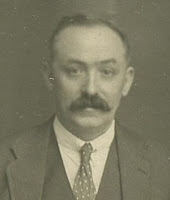 As fathers go, Harry Blaney was an exceptionally good one in the eyes of his children, Elizabeth (Bess), Stanley and Albert. Throughout the 1920’s, all three of them eventually physically left England separately and immigrated to Canada, each for their own reasons, leaving their parents behind. They carried their memories of him and their mother Martha Jane and their memories of their childhood in Victorian England with them. Their adult names were Elizabeth Welch, Harry’s eldest daughter, and two of his sons, Albert James, and Stanley Eric.  Much later, in the mid 1950’s, his youngest daughter, Martha Louise Darby also immigrated to North Vancouver, B.C. Canada with her family.

This story has been written by two of Harry’s Canadian descendants, a granddaughter, Patricia Koretchuk (Stanley’s daughter), and one of his great-grandchildren Margaret (Peggy Atkinson) Boot (granddaughter of Elizabeth).  His story also includes contributions by John Blaney (a grandson living in England), Peter Blaney (a great-grandson to Harry and son to John Blaney) and Roger Darby (a great-grandson of Harry’s and son of Louise). His story, including public record research by Peggy and the remembered details of Harry’s life, is a truly group effort informed by family lore and culled from the memories of his adult children (our parents), who rarely saw him after they left England.  Travel took much longer and retaining a job to fund their own family needs intervened to prevent their returns.  Times were tough and money was scarce, in spite of their hard work. The Great Depression, hardships, World War II, life adjustments, aging and illness all combined to prevent or strictly restrict return visits to the home country, England.

For all four of Harry and Martha’s children, their admiration of Harry never faltered. Harry’s humour, his talent for telling stories, his kindness and the survival skills that Harry taught served them all well, as demonstrated in this collection of family remembrances. For those Blaneys and others who read about Harry, we writers hope his life and actions will add to knowledge of the times and cultural influences in which he lived.  He was a worthy man, an intelligent, talented, working-class father who taught his children by example the contradictions of physical abuse, mental strictness, kindness, and the joys of singing, whistling, music and friendships. He was a man who, though strict, aroused enduring love, laughter, and respect in his children and also in their descendants. Though he died, as we all must, hopefully this writing will continue his legacy and reveal his true nature to his wide-ranging family, today.

For those Blaney extended family members who might read this, we writers hope you, too, will experience Harry Blaney’s laughter, his willingness to share his attitudes, his strengths, his love, helping his family, friends and neighbours to survive what we now know was a “caste system”  in Victorian England. We think Harry would have liked that to happen.

Harry was the second youngest of eight children. He had three older brothers, three older sisters and one younger sister. He lost his father Edwin Blaney at the age of nine and his mother Ellen Elizabeth Langley never remarried, raising the family by working as a self employed dressmaker.

Harry worked in the leather trade, a popular trade in the city of Birmingham, England coming from a long line of Blaney leatherworkers; his father, his father’s uncle and his grandmother. He also worked for some years as a granite set layer, lifting and setting granite blocks (or sets) measuring about 4 inches square and 4 inches deep (forming a cube). At age 15 he was working as a clock case maker, at age 25 working in a lumber mill and the 1911 census records his occupation as a leather worker. In his later years until retirement about 1946, he was a foreman in the cutting room of Lycett Saddles, making bicycle saddles and the tool pouches that used to be standard on bicycles.

In his younger days, sports were his interest. He achieved the title of “English Individual Champion” in air rifle target shooting and was awarded a gold medal (which he sold because he needed the money). Although he was only about 5’4”tall, his friends nicknamed him “Hack”, after a German fairground strongman named “Hacklesmith” because, like him, Harry had big biceps and superior strength, probably developed as he lifted the sets of granite and built roads.

Harry had many interests throughout his life.  He bred wire-haired fox terriers, nicknamed “rough haired” terriers. His favourite wire-haired terrier was called “Roger”. He also had a Jack Russell bitch called “Spot”. A story is told about him training another bitch, “Floss,” to “fetch” a choice piece of meat from a nearby butcher’s outside slab, on command – meat for free. As well, Harry bred Border canaries, raced pigeons and was probably a boxer, because he taught his children to box – including his daughter Elizabeth. She told a story about knocking her brother “Ted” (Edwin) senseless by winding up and hitting him on the chin during one of these sessions.

The reason he taught his daughter to box was probably for protection. Harry’s son Stanley taught his daughter Patricia to box when she was being bullied at school, in Canada. In England, the Blaneys lived in tough British working-class neighbourhoods. Yet, Harry trained his children to settle their own differences with honourable conduct according to the 1876 Marquess of Queensberry Rules, in the family boxing ring, located in the attic of their house.  In those days, males could also occasionally use their skill at boxing to earn extra money, to pay for rent or food when times were tough.  So, he was actually teaching his sons a survival skill.  (Promoters paid volunteer boxers a tiny percentage of the money the promoters made by collecting from unsuccessful betters, betting on the outcomes of the fights.)

Though Harry was poor and he could be a devil, he was also compassionate and a good citizen.  For example, he could repair shoes and he did so not only for his own family but also for neighbours’ children, when he noticed they needed it. He could make shoes as well. He was a keen gardener having a great love of: first – roses; then carnations; then pansies - all of which he grew with great success. He raised chickens for the eggs, bred rabbits, grew vegetables and had ferrets and terriers to hunt wild rabbits and catch rats. (Terriers were originally created as a breed to kill rats).

Harry loved fishing and was a good fisherman. His favourite river was the river Severn, a 220 mile river, the longest in the United Kingdom.More than once he took his grandson, John along for a fishing outing in the Pearlswood Lakes area, another favourite.  They reached the lakes by bicycle, a long ride.

As much as Harry loved fishing, he hated: decorating the house; doing any cleaning, any fetching of groceries or other shopping. Like most men of his time, Harry considered these tasks “women’s work.”

As an illustration of this last statement, grandson John remembers a time when his grandmother, Martha Jane Blaney, went to stay in the town of Battle, for a two-week visit with her sister.  While she was away, Harry used every cooking utensil in the house, until he had used them all. As well, he raked the ashes out of the fireplace onto the hearth, then left all those ashes AND all the cooking utensils (The whole mess!) for his wife to clean up when she returned.Yes, Harry was a 100% Victorian man, who thought women were put on earth to serve men.  (He wouldn’t get away with this today, in 2013!)

Having said that, he made sure he worked hard at men’s work, though he was only 19 when he married Martha Jane Elcocks, on July 9, 1895. To the best of his ability, he would do anything necessary to make sure his family was cared for. He was about 73 years of age before he finished work, retiring on a pension of about 10 shillings a week (about half a dollar in Canadian money – a pittance, even in 1946).  By WWII he was too old to serve in the army. When his youngest son, Alfred was killed at Dieppe, 19 August 1942, Harry grieved for a long time.

As you can see so far, Harry Blaney's working-class family life in Victorian England is not as "staid" as pictured in recent popular movies and T.V. shows.  Do read the second half of Harry's blog entry to discover more about the complexities and challenges this well-loved father and friend met and triumphed over, in Victorian England.